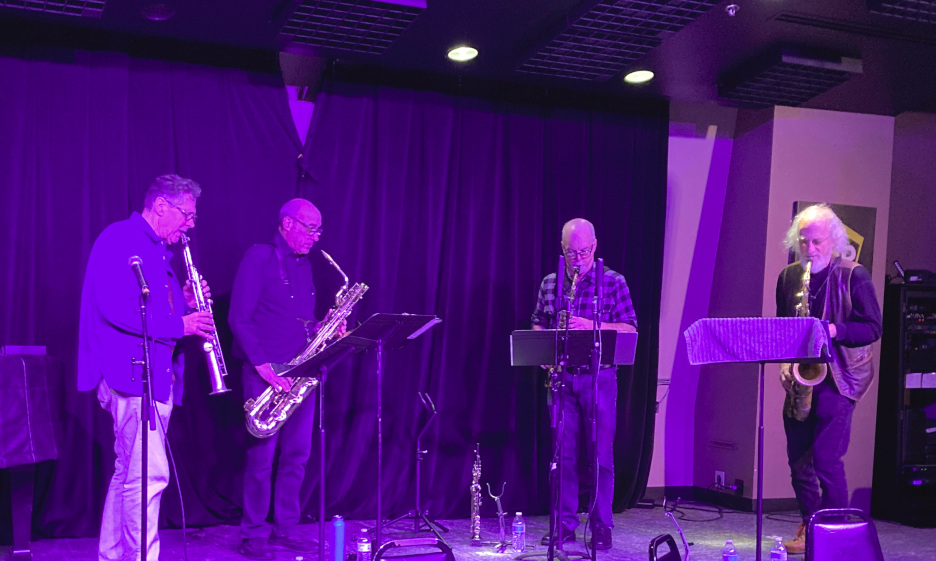 One of the inescapable trends in music over the last decade has been the convergence of two traditions in improvised music, one that was created in the African diaspora and another that evolved in European art music. Classifications are odious and they're increasingly meaningless. Are Wadada Leo Smith's string quartets jazz or classical works? How about pianist Cory Smythe's piano experiments? And what category is big enough to contain the genius of Tyshawn Sorey?

Which brings us to the Rova Saxophone Quartet which, delivered a taut, 58-minute set presented by the New Ghosts collective at Cleveland's Bop Stop.

While the erasure of genre boundaries between the two improvised traditions has accelerated recently, it's nothing new. The quartet, Bruce Ackley (soprano), Steve Adams (alto and sopranino)}, Larry Ochs (tenor) and Jon Raskin (baritone), has freely crossed musical frontiers for 45 years.

They do so with precision, devotion and a lack of high-art pretension that allowed the collective improvisation that opened the show to register as an invitation into a seductive sound world, not as a manifesto. Was it jazz or classical? Who cares? It was musical and in its use of breath sounds, invitingly human-scaled.

Adams' "Xenophobia" was one of three pieces drawn from Rova's thirty-fifth album The Circumference of Reason (ESP-Disk,' 2021). At about eight minutes, it was also the longest of the eight pieces on the set list. Yet even the uninitiated in the audience of about 75 could find familiar reference points in the quartet's sound, which was meaty, full and muscular, or, in the way that individual players soloed over ensemble riffs, somewhat evocative of Charles Mingus.

But Rova can do delicacy, too. They proved this on Adams' "Monkey Puzzle," which began in a columbarium of squawks and twitters that combined in writhing tendrils of sound that recalled the plant for which it was named.

Like John Zorn's Cobras, "Radar 731" is less a title than a description of a method, in this case, a cueing system where any individual player can change the shape of the performance through a system of hand signals. There was a strong element of play at work here, and the signals recalled a lively round of the Italian game barbut' as the quartet's members tossed the hot potato to one another.

Raskin's "Torsion Time Groove" followed, kicking off with a chugging, motoric rhythm driven by the composer's baritone, and ending on a peaceful diminuendo unison figure.

The set ended with two of the most compelling compositions from The Circumference of Reason, the reflective nachtmusik of "NC-17" and a passionately resolute, nearly fierce performance of "Extrapolation of the Inevitable," an arrangement by Ochs of a piece by the late tenor saxophonist Glenn Spearman. The latter was filled with references to the blues, and in Ochs' solo statement, of Albert Ayler, the animating spirit of New Ghosts. If you wanted to plant the jazz flag in Rova's musical territory, this was the place to do it.

But after a round of appreciative applause, the band returned to the stand for a short piece dedicated to the soprano saxophonist Steve Lacy. It was suffused by the off-center lyricism of its dedicatee, jazz-ish, but notated not by a chart, but rather in a colorful, three-page graphic score. It was as much "Le Tombeau de Couperin" as "Goodbye Pork Pie Hat," a fond memorial to a great musician whose legacy of non-idiomatic improvisation is a clear inspiration for Rova.

Long may they roam.