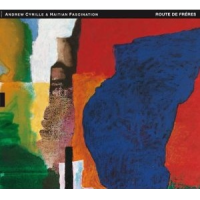 Defying preconceived notions, a band featuring two highly persuasive advocates of the free and the near-free has produced a record of warm and winning world music potent enough to lift the spirit in the depths of winter.

The band is named Haitian Fascination for a very good reason. Not only is drummer Andrew Cyrille the son of a Haitian mother, he's always been a player able to light fires under anything. On this occasion his rhythmic vitality is understandably to the fore on "Route de Freres, Part 1—Hills of Anjubeau," where Hamiet Bluiett issues a reminder of how he has one of the most distinctive baritone sax tones since the great Harry Carney. Indeed, so full of the joy of life does he sound here that the thought of him as a counter-factual Duke Ellingtonian springs to mind.

"Part 3" of the same piece carries on the Ellingtonian air in its jaunty theme, although Alix Pascal's acoustic guitar applies a different palette to the canvas, while Bluiett is nothing short of ebullient. The resulting mood is infectious to the point where bassist Lisle Atkinson can't help but get caught up in it.

A truism that applies, even in these grim times, "Hope Springs Eternal" is a thing of no little loveliness—balm, indeed, for the troubled soul which, in its unhurried way, is the polar opposite of some of the music Cyrille has been involved with in the past. Bluiett's lyricism is of an order that he hasn't over-employed on record, while Pascal's guitar of choice lends the music a blend of subtle colors that wouldn't have been achieved on the electric strain.

Bluiett's "Isaura" is the sound of gentle rolling thunder with a subtly rhythmic heart. Pascal is, again, at his eloquent best over the quiet storm generated by Atkinson, Cyrille and percussionist Frisner Augustin, and the whole has a cohesive air that defies every paper prediction.