BY CHRIS MOSEY
September 13, 2015
Sign in to view read count 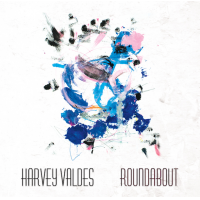 New York guitarist Harvey Valdes started out at the age of 12 listening to bands like Napalm Death, Sacred Reich and Sick Of It All.

"It was the music that spoke to me: loud, heavy and with a ton of attitude," he told the zine Guitar Moderne. "I would bring in a cassette tape of a band like Nuclear Assault and play it for my teacher, who was a jazz/wedding musician. He would listen to the song a few times, figure it out by ear and then teach it to me. I would go home and play the riffs and solo parts non-stop until the next lesson."

Even on this album on which he plays jazz standards solo in the Joe Pass/Joe Diorio manner, the thrash metal bands of his youth lurk in the mix somewhere, at least according to Valdes. He says: "I think all the music that has influenced me comes out in my playing consciously and, more often, unconsciously."

He acknowledges the more obvious debt to Pass and Diorio: "This record is somewhat of a nod to those great guys with my own very extended approach to re-harmonization."

He reshapes the songs on Roundabout to the point where sometimes only snippets of the original melodies are left intact. Yet melody in a wider, more abstract sense survives.

Perhaps the most successful of these reinvented numbers are "Stella By Starlight" and "Alone Together," the Arthur Schwartz song from 1932, nothing to do with Fall Out Boy.

Valdes has his own agenda. "When I make music, all of my guiding concepts are musical in nature," he says. "I might be interested in a particular texture, rhythm, or the synergy of interlocking lines. I am interested in the vast and endless complexity of sound and the way that various sounds can take a listener on a journey."

His approach is undeniably clever if ultimately a trifle too analytical for comfort. In "re-harmonizing," the original feeling of the songs often gets lost, though this could have been Valdes' intention.

This music is cerebral full stop. Oh for a touch—just a touch—of such entertaining masters as Kenny Burrell or Herb Ellis.

Harvey Valdes doesn't do entertainment. He still has that much in common with Napalm Death.

All The Things You Are; How Deep Is The Ocean; Blue In Green; Stella By Starlight; In Your Own Sweet Way; Alone Together; I’ll Remember April; Invitation; You Stepped Out Of A Dream.