BY NENAD GEORGIEVSKI
September 13, 2015
Sign in to view read count 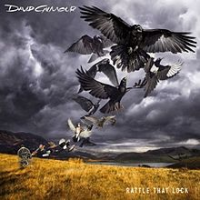 It seems that the working life of guitarist and singer David Gilmour is on a constant roll. Apart from being the front-man of one of the greatest bands in the world Pink Floyd, which career he put to rest with the recent remastered reissues and the fabulous Endless River, (Columbia, 2014) his solo career also took flight. Though he hasn't released any new material since the On an Island record (Columbia, 2006) he was not really idle, and more important Gilmour never coasted himself like a legacy act, but he pushed himself even more like with the collaboration with ambient pioneers The Orb on the colorful Metallic Spheres. (Sony Music Entertainment, 2010)

At this point of his career, Gilmour has little left to prove, and yet his fourth solo album Rattle that Lock is anything but a cozy reassertion of values. In contrast to Floyd's swan song Endless River, which was produced almost parallel to this one, these two records are poles apart in their concepts, aims and final results. Co-produced by a long time collaborator and co-producer of both Endless River and On an Island, guitarist Phil Manzanera, Rattle That Lock is an album that is sonically rich and detailed. On an Island was more of a straight, mainstream record and the difference is the immense and imaginative landscapes that meld together classic album, rock, pop, jazz and ambient music in expertly crafted songs.

Again, Gilmour is not a legacy act and Rattle that Lock is surprising for sounding very much of the moment. The title track has an interesting melody that he actually heard and sampled from an announcement jingle at a train station in France. The melody adds a certain playfulness bolstered by a pulsating beat that drives the song powerfully. Gilmour creates a multi- layered and vaguely soul-influenced arrangement and the choir that is employed in the background adds spaciousness and depth in a beautiful way.

"A Boat Life Waiting" is a reflection on the passing of keyboardist Rick Wright. Apart from the magic he created with the band Wright was known for being a passionate sailor. This song is probably the most Pink Floyd-esque tracks of all—the sample sounds and background ambiances evoke easily recognizable voice sampled songs from the band's oeuvre. But the song turns into something else with its group vocal chants, something spiritual and deep. It is a beautiful and heartfelt tribute.

There is wonderful, graceful guitar work throughout Rattle That Lock which is no big surprise there. The album isn't really a flashy guitar ax-fest. What is beyond question is the skill Gilmour uses on his instrument, which never transforms into a pointless showing off. The seldom seen ability to invest a note or a phrase with meaning is partly what has always distinguished his voice and has set him apart from other guitarists who rush in to fill in all the spaces. The introspective tone of the album also precludes any explosive soloing though some tracks like "In Any Tongue" or have immensely lyrical and powerful soloings. What Gilmore gives emphasis on is architecture, moods and melodies. "A Girl in the Yellow Dress" is a beautiful jazzy affair. It's a slightly slowed dixieland which brings warmth and tenderness.

There's a captivating agility present throughout this album, even in its more reflective and graceful moments. "And Then..." is the perfect ending with its fluid and lyrical guitar bravuras that seem to float over steady beat and rich ambiances and orchestral undercurrents of strings. It's a masterpiece of instrumental with a strong soundtrack feel to it.

As a record, Rattle that Lock is best enjoyed as a whole. These songs seem to blend seamlessly into each other. Although rich in spontaneity and fluidity, it also feels very much like a piece of musical architecture. While the album certainly has its occasional dips and valleys, it is a complete musical statement worth hearing.

5 A.M.; Rattle That Lock; Faces of Stone; A Boat Lies Waiting; Dancing Right in Front of Me; In Any Tongue; Beauty; The Girl in the Yellow Dress; Today; And Then...