By Matt Marshall
September 8, 2009
Sign in to view read count 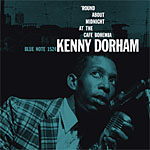 There's a thickness to the sound of this 1956 Kenny Dorham set as reissued by Music Matters on two 45-rpm records—a density that blows from the speakers and settles in the room like smoke. Which is to say the fidelity of the Music Matters product proves itself as strong on live recordings as it has on their Blue Note studio reissues. Here, the club acoustics are palpable, requiring only the cracking of a favorite beverage to complete the scene.

Not long from his stint with Art Blakey's Jazz Messengers and their recorded blasts at the Cafe Bohemia, trumpeter Dorham gathered a tight group of young musicians to have his own go at the legendary Greenwich Village establishment. Dorham and guitarist Kenny Burrell would both go on to attain considerable success as leaders, while the others remained mostly in supporting roles, never becoming household names as leaders, even to jazz fans. Still, tenor saxophonist J.R. Monterose is a nice foil for the trumpeter, often following Dorham's bright, ballooning sound with a thinner, abrasive take—flowing where Dorham stutters ("Monaco," "Mexico City"), squeaking and giving space after the leader sprints ("Hill's Edge").

There's a nice, if unsurprising, flow to the program, with the bop burners cooled and dimmed by the interspersed "'Round About Midnight" and "Autumn in New York," the latter a solo vehicle for Dorham in which he captures a delicious, crisp moment of solitude within the Big Apple. "Monaco," a Dorham original, opens the record on a thick loping beat that showcases Sam Jones' fat, insistent bass work, which accounts for much of the record's full cloud of sound. (Eat your heart out, Phil Spector.) Dorham enters on extended phrases, but soon picks up the pace and begins punching out fast but articulated lines—the type of well-constructed progression for which he'd become known. Burrell channels Charlie Christian on his opening-track solo, but later shows sparks of his developing individual voice, most notably on "Mexico City" and "A Night in Tunisia."

Drummer Arthur Edgehill rarely steps out of his supporting role, though the flurry of his sticks is in evidence throughout "Mexico City"; his cow bell pronounced on "Tunisia"; and he's obviously given room to stretch on the Dorham-penned nod to the drummer, "Hill's Edge." Pianist Bobby Timmons solos on most tunes, but he often makes more of a statement when fashioning blunt chordal motifs beneath the horns or emerging, as in "Mexico City," to walk in thrilling harmonic step with Dorham.

'Round About Midnight at the Cafe Bohemia is a full and often exhilarating set of mid-'50s bop. It also proves, in the three Dorham originals, that the trumpeter was a quality composer, capable of rendering more than just Latin-tinged themes like "Blue Bossa" and "Una Mas." And the excellent fidelity of this vinyl reissue boosts the session's composed but inventive ambience.