By DOUG COLLETTE
October 10, 2020
Sign in to view read count 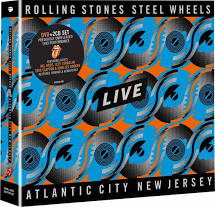 The The Rolling Stones have previously covered their Steel Wheels (Rolling Stones, 1989) tour on Live At The Tokyo Dome 1990 (Eagle, 2012), but given its significance in their career timeline, it's no surprise that the band has decided to revisit it again. It is, however, no criticism of Steel Wheels Live to state its almost subliminal temptation to suggest that a viewer who has seen one or the other of these concert films has seen them all. On the contrary, this latest exhumation from the Stones' vault has its own distinctions, the sum of which compensates for some noticeable but ultimately moot blemishes in the presentation of this 2CD/DVD set.

By the time the Rolling Stones made their return to the road in 1989, the band had been off the road for seven years and from the very start of a predictable yet charged commencement of this concert, via "Start Me Up," it was clearly exhilarated to be back on the Atlantic City, NJ stage (one of the smaller venues on this extended tour). During the early part of this two-and-a-half hours, there's a level of intensity most bands aim for as rousing denouement to the show and, particularly in the case of vocalist Mick Jagger's peripatetic and often high-speed movement around the expansive stage—set up of Mark Fisher and lit by Patrick Woodroffe—it's hard not to wonder if he's going to exhaust himself.

But this setlist is paced equally-well as, if not superior to, comparable releases such as Voodoo Lounge Uncut (Eagle, 2018) or Some Girls: Live in Texas '78 (Eagle, 2011). In this case though, contrasting other such presentations, the mechanics of the musicianship transcend the stage production. That's not to say the ramps and catwalks that allow Jagger to roam wide and far, even a ways into the audience, don't add to the immediacy. But that factor's much more noticeable when guitarist Keith Richards scampers along at the very same time he's playing a scathing solo during "Sympathy For The Devil." The inflatable female figures towering left and right during "Honky Tonk Women" are titillating to be sure—especially as Jagger leers straight at the camera standing beneath one of them—but less memorable than the gritty riffing and interplay between Richards and guitar partner Ronnie Wood.

What's even more telling is that this iconic number is of a piece with the first blues-oriented tune of the night, "Midnight Rambler." Having evolved from an indulgence in suggestive showmanship on the 1969 tour to a modified vari-tempi shuffle featuring Jagger blowing a randy harp, it stands as one of more than a few such vintage selections interspersed with new material off the album from which this title's name derives, including "Mixed Emotions" and "Rock And A Hard Place." The ebb and flow of the concert is increasingly palpable too as the show progresses through some choice nuggets from the Stones' past like "Paint It Black," "Ruby Tuesday" and even a cull from the oft-derided psychedelia of Their Satanic Majesties Request (London, 1967).

By the time "2000 Light Years From Home" has come and gone like some fever dream, Richards has been taking most of the guitar solos rather than Wood, who assumed the majority of earlier such intervals. Longer and more frequent fretboard instrumentals sustain the pace, with the occasional help of Chuck Leavell on piano, long-time Stones' saxophonist Bobby Keys and the four-piece Uptown Horns corps, this despite the fact both are usually just barely audible in Sam Wheat's sonic mix, with the latter most egregiously invisible during the second tune, "Bitch." This spotlight on the venerable guitarists helps turn "( Can't Get No) Satisfaction" into a Stax-style soul workout, further befitting the Rolling Stones' early influences.

Three background vocalists in the persons of Lisa Fischer, Cindy Mizelle and Bernard Fowler are more rather than less superfluous here, except for their singing chant on "Brown Sugar'" and their vocal encouragement to bassist Bill Wyman (on his last tour with the band he helped found). The females' flirtations with Mick Jagger may well have also been lost on most of the audience, except perhaps for those watching on PPV, as video in the hall is only prominent enough to warrant a passing shot late in the show.

As is usually the case, the sit-ins are a mixed bag, but don't derail the cumulative momentum. Introduced somewhat flippantly by Mick, Guns N' Roses' Axl Rose and Izzy Stradlin are likewise almost as summarily dismissed as this first-ever live rendition of the Beggars Banquet (London, 1968). but then, the two actually radiate less stage presence than blues icon John Lee Hooker, who appears only briefly, but extends the nod to the Rolling Stones' roots begun with Eric Clapton's spotlight on "Little Red Rooster."

At the time of Steel Wheels Live, the Rolling Stones were arguably in a much more positive space than that which they inhabited at the time they issued Goat's Head Soup (Rolling Stones, 1973). The subject of an archiving initiative (behind which there was an unprecedented publicity campaign) coincidental with this 2CD/DVD set, the former finds the iconic group at the outset of an almost imperceptible downward slide. In comparison, with a rapprochement having been broached between the co-leaders of the band (Jagger and Richards, aka 'The Glimmer Twins'), the world's greatest rock 'n' roll band was out to reclaim its title at the end of the Eighties.

With drummer Charlie Watts his ever-indefatigable self, the Rolling Stones may very well have accomplished that feat. Certainly by the time the core four of the band takes its bows, Louis J. Horvitz' video direction has illuminated perspective(s) of them and their supplementary accompanists from every conceivable angle in the venue, an unmistakable reminder that, even in the more extravagant settings of Bridges to Bremen (Eagle, 2019) and Bridges to Buenos Aires (Eagle, 2019), the real theater of a Rolling Stones concert derives from the band playing its music.

Would that the ancillary content in this package held suit. Anthony DeCurtis' essay in the enclosed booklet borders on puffery, while the accompanying array of photos, colorful as they are, clearly appear taken from another of the three nights in this run (with one shot inexplicably flipped). But that's all the more reason to relish the two compact discs within Steel Wheels Live as further opportunity to savor this music as the heart of it all.