Chuck Leavell has been pleasing the ears of music fans for more than 30 years now. His piano and keyboard work has been heard on the works of Eric Clapton, The Rolling Stones, The Black Crowes, George Harrison, The Allman Brothers Band, The Indigo Girls, Blues Traveler, Train, Montgomery-Gentry, Lee Ann Womack and many, many more. In addition to being a well established pianist/artist in the music industry, Leavell is also a published author, tree farmer, and keeps busy with his advocacy work on behalf of the environment.

At the age of 13, Chuck got the opportunity to see Ray Charles in concert. He recalls, “Ray and the band played an incredible show, and it had such an impact on me that I made up my mind there and then that that was what I wanted to do. I decided that night what I wanted as my career.” When he was 15, Leavell made his way to Muscle Shoals, AL, and the legendary studios there, where he played on several records, including Freddy North's soul classic Don't Take Her, She's All I've Got.

In 1969 Chuck moved to Macon, GA, where Southern music impresario Phil Walden had recently opened Capricorn Records and studio. There he joined Alex Taylor's (brother of James Taylor) band Friends and Neighbors. He spent the next year and a half with Taylor and appears on his Capricorn album, Dinnertime. After his stint with Taylor, Leavell spent six months on the road with Dr

. John, who was managed at the time by Walden. Leavell refers to his time with Dr. John as his “college education”, because he spent most of his time watching a master at work.

In 1972, shortly after the death of Duane Allman and prior to the death of Berry Oakley, Leavell was asked to join the Allman Brothers Band. He was barely 20 years old at the time. The first album he recorded with the band was Brothers and Sisters, which included the classics “Ramblin' Man” and “Jessica.” The album hit number one on Billboard's Pop charts. He went on to record two more albums with them before the Allmans disbanded.

Catching the ears of and becoming friends with the late rock 'n' roll impresario Bill Graham and keyboardist Ian Stewart, the original “sixth” Rolling Stone, in 1982 he was invited to assume a significant keyboardist/vocalist role for the Stones that continues today.

Says guitarist Keith Richards: “Without the continuity that Chuck brings to us, the Stones would not be the Stones.” Leavell describes his role with the Stones as a “sort of musical navigator” who keeps track of arrangements and keeps things balanced in addition to spicing up the music with his keyboards. “It's my job to keep Mick, Keith, Charlie and Ronnie all happy,” Leavell says.

In 1999, Leavell released his first seasonal album, What's In That Bag? on Capricorn Records. Since that time it has become a holiday favorite and it continues to rate highly every year in Christmas CD sales.

In 2001, Leavell released Forever Blue: Solo Piano, a collection of seven original songs and three classics including “Georgia On My Mind.” With this release, Leavell reached down deep in his soul and his roots and created an extraordinary piece of work. Forever Blue is still one of the most popular solo pianos CDs around.

His most recent release, Southscape has been described as “Southern Jazz”. With Tim Ries and Randall Bramblett contributing their talents on saxes and a rhythm section of experts Michael Rhodes on bass and Chad Cromwell on drums, with a guest appearance on two tracks by Larry Carlton, this exciting new music raised the eyebrows of fans and critics alike. The nine tracks include eight new songs written or co-written by Leavell and a wonderful re-visitation of the classic “Jessica” that he is so well known for. The theme is a musical portrait of the South, and Chuck delivers a beautiful painting.

The record-breaking 2005-2007 Rolling Stones' “A Bigger Bang” tour marked Chuck's 25th year with the band, and has shown yet again that the Stones are indeed the “World's Greatest Rock 'n Roll Band.” The summer and early fall of 2007 found Leavell back with the Stones for a European tour. This was an extension of the “A Bigger Bang” tour, and completed the 147 show two year run for the band, another record-breaking tour for the Stones.

After the tour ended in August of 2007, Leavell stayed on in Europe to do a solo tour called “Green Leaves and Blue Notes.” There he performed with some of Germany's best musicians, and the result is captured on a new double live CD called Chuck Leavell Live in Germany. In addition to performing a handful of Leavell's original tunes, the group performed covers of such classic songs as The Allman Brothers' “Jessica” and “Statesboro Blues;” The Rolling Stones' “Honky Tonk Woman” and “Rip this Joint;” a rousing rendition of Les McCann and Eddie Harris' “Compared to What;” moving renditions of Ray Charles' “Georgia” and George Harrison's “Here Comes the Sun;” and a few standards including “In the Wee Wee Hours” and “Route 66.” Chuck Leavell Live in Germany set to be released in May of 2008.

In addition to his musical expertise, Leavell is also a respected authority on forestry and conservation. In 2001, he penned “Forever Green: The History and Hope of the American Forest.” This book is now in its second printing in the U.S. and has been translated and released in Germany and Austria. Leavell is a highly sought after speaker on the subject, invited by various committees, environmental officials and high level government officials to share his knowledge and help shape forest policy in America. Along with several conservation recognitions, he and his wife Rose Lane were given the ultimate honor for their outstanding management of their own forestland, Charlane Plantation in Macon, Georgia, by being named National Outstanding Tree Farmers of the Year in 1999.

Leavell's autobiography entitled “Between Rock and a Home Place” has garnered flattering reviews with one critic even declaring it the “best rock autobiography ever.” Taking the reader from his early days as an upstart musician in Alabama in the late '60s to his classic '70s years with the Allman Brothers Band, Sea Level and his many sessions as a premiere sideman to his more than 25 years with the Rolling Stones and much more in-between, this book rocks. Leavell also discusses his passion for forestry and the environment as well as his dedication to his family. The book has been translated into Japanese and released there in 2008.

In late 2006, Leavell released his third book, a wonderful children's book called “The Tree Farmer”. Beautifully illustrated by Rebecca Bleau, it has won several top awards including the “Growing Good Kids” honor; the “Media Award” from The National Arbor Day Foundation; and a special “Book of the Year” award from the American Farm Bureau.

In addition to his solo projects and working with the Stones, Leavell continues to be in-demand session player and producer. Recent years finds him on recordings with top notch country artists like Lee Ann Womack, the Montgomery-Gentry Band, Miranda Lambert as well as two new Nashville artists, Lady Antebellum and David Nail. He recently recorded with Mike Gordon (bassist for the celebrated Phish band) for a new CD to be released in 2008.

He also and manages plenty of time to work on Charlane Plantation, his beloved hunting and pristine pine forest plantation. At his home in rural Georgia, you can find Leavell working in the woods, playing his piano and declaring he's fortunate to have three real passions in his life: “My family, my trees and my music,” he says. “I have no intentions of slowing down in music now!! Maybe one day I will hang up my rock 'n' roll shoes... and if so, it will be right here on a pine tree.”

Back in the late 90's People Magazine called Chuck Leavell “the sixth Rolling Stone,” but accompanying the story was a picture of him hugging a tree. The New York Times, meanwhile, says he's “a man who can see the forest for the trees and helps nurture it” in a story topped by a picture of Leavell onstage with Mick Jagger. The truth is that Leavell is all those things - and more. He's one of music's most respected and sought-after pianists, a devoted husband, father and grandfather, and a modest man who has a knack for taking his talents to the right places at the right times. Show less

Watson's Riddle featuring Chuck Leavell to be released on Palmetto... 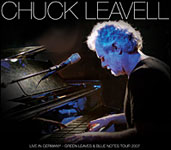 What In That Bag?

All About Jazz musician pages are maintained by musicians, publicists and trusted members like you. Interested? Tell us why you would like to improve the Susan Tedeschi musician page.