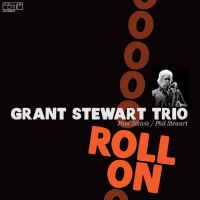 Add Grant Stewart's name to the growing list of tenor saxophonists who are gaining broad approval by reanimating exemplary yet by and large overlooked songs from the Great American Songbook and elsewhere and lending them a fresh coat of paint that not only accentuates their timeless charm but does so while swinging in the grandest jazz tradition. Others who have championed that cause in recent years include (but are not limited to) Harry Allen, Ken Peplowski, Scott Hamilton and fellow Canadian Cory Weeds, for whose Cellar Live label the engaging trio session Roll On was recorded.

Among the traits these tenors have in common is a clarity of purpose coupled with a deep and abiding respect for the harmonic and rhythmic supremacy that separated these songs from the ordinary when first they were written. To paraphrase Irving Berlin, the songs may be ended but the melodies linger on. Stewart and his companions (bassist Paul Sikivie, drummer and younger brother Phil Stewart) use melody as their launching pad, sailing through familiar tunes before taking them into the more abstract realms of improvisation, areas in which each of them excels.

Astute readers may have noticed by now that there is no piano in the group, hence the task of rhythmic support falls squarely on the shoulders of Sikivie and Phil Stewart, neither of whom seems the least unnerved by the extra burden. In fact, one scarcely notices the keyboard's absence as bass and drums lend unflagging support to Stewart's warm and expressive tenor. Sikivie and Stewart (the drummer) rise to the occasion on Bert Kalmar / Harry Ruby's buoyant "Thinking of You," which opens the session, and solo with assurance whenever called upon, as they are on several numbers. Meanwhile, Stewart (the tenor), cruises easily through four more standards, the ballad "Just as Though You Were Here," Bud Powell's "Un Poco Loco," Fats Navarro's "Fats Flats" and Elmo Hope's sunlit closer, "Roll On." Any misgivings about his chops are laid to rest on the trio's scorching version of the standard "After You've Gone" (to which brother Phil appends an emphatic exclamation mark).

The message to those who prefer their jazz straight with no unwelcome chaser is to fasten your seat belts and prepare to Roll On with a trio whose swing quotient is high and whose devotion to the music at hand is unequivocal.

Thinking of You; Here I’ll Stay; After You’ve Gone; Just as Though You Were Here; Un Poco Loco; End of a Love Affair; Fats Flats; Do You Know What It Means to Miss New Orleans; Roll On.