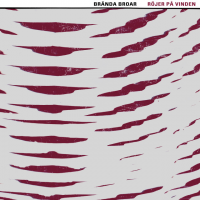 Of course, all of these guys have collaborated on a wide variety of musical projects before forming Brända Broar. Persson and Borg are both members of Kvintetten Som Sprängdes (whose music Brända Broar's resembles), and Persson has gigged and recorded with guitarist / label honcho Anders Ahlén's group. Bromander has worked with, among others, the Afrobeat band Music is the Weapon. Of the four, Carlsson has the longest and most diverse resume, encompassing indie rock and free improvisation as well as various forms of jazz. His most well-known musical partners include Mats Gustafsson and Kjell Nordeson in the band Swedish Azz.

YouTube clips of Brända Broar's performances from a few years ago suggest they've taken a cue or three from Spy vs. Spy, John Zorn's hyper-energetic, thrashy late 1980s tribute to the music Ornette Coleman. The music on Röjer På Vinden suggests the quartet has broadened their approach somewhat over the years. Persson, also the chief composer for Kvintetten Som Sprängdes, is the sole composer represented here. Though Brända Broar's music is similar, Persson's writing for this band eschews a lot of the avant-garde elements that characterize a good portion of Kvintetten Som Sprängdes' music. It's impossible not to connect Röjer På Vinden to the Coleman / Eric Dolphy / Anthony Braxton continuum of modern avant-garde jazz. Persson's use of the sopranino saxophone is especially redolent of Braxton's previous work, as are his convoluted math-jazz melodies. Pianist Rasmus Borg is, in every respect, an ideal foil for Persson. Combining a rigorous, classically-informed technical approach with a deep knowledge of modern jazz styles, Borg's sometimes wayward comping is always sympathetic and complementary; his solos are consistently inventive, witty and original.

The rhythm section has a real muscularity to it that propels Persson's compositions implacably forward. The opening section of "Dömd För Olaga Utseende" is a case in point. Though taken at a moderate tempo, Carlsson's overtly feathered bass drum locks into Bromander's throbbing bass line to produce an insanely hard-swinging base from which Persson launches the piece's tricky melody, full of intervallic leaps and odd pauses. A similar rhythmic urgency infuses "Borta Bra Men Bebben Bäst," a piece that is as full of unbridled energy as any free jazz foray. Yet it's not free jazz: unusual compositional elements are, in fact Brända Broar's bread and butter. Persson's music, like Braxton's, is full of repeated phrases which are broken up in various ways and reconstituted. Many of these compositional roads lead to swinging, edgy-yet-post-boppish solos. By sheer contrast, "Stenlunga" progresses at a sludgy, bass-heavy lope underneath Persson's wildly impassioned alto. Brända Broar's investigations also veer into a form of European avant-gardism that resembles contemporary classical composition as much as it does modern jazz. These elements pop up on several pieces, most notably "Rocka Röven Av Högern" and "Brända Broar."

Startling, fresh, and risky, the music of Brända Broar is yet another pleasant reminder that jazz is youthful, alive and well, all over the world.