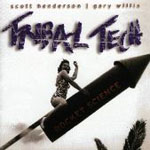 Scott Kinsey's keyboards add a touch of B-movie nostalgia to several of the tunes, conjuring memories of the weird Moog-laden soundtracks that graced 1960s space flicks. This is a neat coloring tool that is used in just the right measures; otherwise Kinsey sticks to the tasteful organ and synth lines we've grown to appreciate from him. Scott Henderson's guitar lines are as liquid and edgy as usual, a key to the band's smoldering forcefulness, and Gary Willis' fretless bass is an equally dominant presence. Many studio effects, from backwards-taping to quacking envelopes, add much to the space-age feel of the disc.

There is a nice variety of style across the tunes this time around. On track #2 drummer Kirk Covington holds down a kind of New Orleans second-line beat beneath Willis' Mu-Tron flavored lines, Kinsey's hot Hammond blasts and Henderson's no-nonsense attack. The guitar burbles and poots like a computer gone mad on the title track, while on #5 it languishes and moans softly. #8 sounds like a luau vacation on Mars; #10 is warm and bluesy. All of the musicians work hand-in-glove as if by artificial intelligence, creating tight, danceable rhythms and song structures that make us laugh and shake our hands in amazement at the same time. It just might take a rocket scientist to make music this creative and consistently pleasing. Bravo to the ground crew at Cape Tribal for another successful launch.