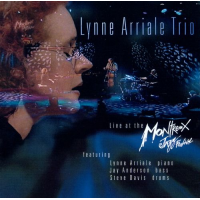 The year was 1994; the location, Orlando, Florida. I was visiting for meetings and, out for a stroll in the evening, I wandered into a small bar with a piano trio. For the next hour or more, I sat entranced by the poise and artistry of Lynne Arriale, a totally new name to me. Her touch, her elegance, her respect for and dedication to melody, her careful listening to and intimate interaction with her superb sidemen, Jay Anderson and Steve Davis; I was enchanted. I learned that she was classically trained but discovered jazz via records during her music study; that she hailed from Milwaukee but now lives in New York City; that she got her first big break in the summer of 1991 when she substituted for Marian McPartland on the "Golden Fingers" tour of Japan; that she was chosen winner of the 1993 International Great American Jazz Piano Competition from a group of over 100 musicians. I bought the only CD she had available (turned out it was her debut release, The Eyes Have It) and returned to Los Angeles, extolling her virtues to whoever would listen.

Well, Arriale and her compatriots have gained a lot of experience and exposure since then, and they are better than ever. This is her sixth album but her first live recording, and listening to it, I recapture the magic of hearing her in Orlando. She takes the stage in Montreux and turns it into the most intimate of musical chambers. "We were conscious of the fact that this particular live performance would become a CD," recalls Arriale. "And every first take is the take that's going to be used, so it increases the pressure. But there's also the element of playing a live concert, and that also inspires a particular energy; a kind of interaction with the audience."

In his 52nd Street review of her disc Melody, Les Line compares Arriale's music to that of Bill Evans, Richie Beirach, Chick Corea, Fred Hersch, and Keith Jarrett. To my ear, she has her own distinctive style and sound, but I'd agree that those musicians represent appropriate comparisons. I challenge you to find a lovelier composition or presentation than Arriale's original "With Words Unspoken." But don't think a wistful, slow ballad constitutes the sum total of her expressive range. Listen to the propulsive energy of Dietz/Schwartz's "Alone Together"; the neoclassical mystery of Monk's "Evidence"; the effervescent charm and whimsy of Miles Davis' and Victor Feldman's "Seven Steps to Heaven," with its dazzling drum solo; the wry dissonance of Monk's "Think of One;" the beauty and poignancy of "Estate"; the airy, sparkling good humor of her second original composition, "Calypso." And thrill with the crowd at your good fortune to be treated to an encore: the simple, hymn-like "Affair to Remember." Despite a piano that didn't match her excellence, this was truly an evening to remember.

Lynne Arriale is a very special artist. Once you've heard her, you likely will not forget her, either.

Alone Together; Evidence; With Words Unspoken; Seven Steps to Heaven; Think of One; Estate; Calypso; An Affair to Remember