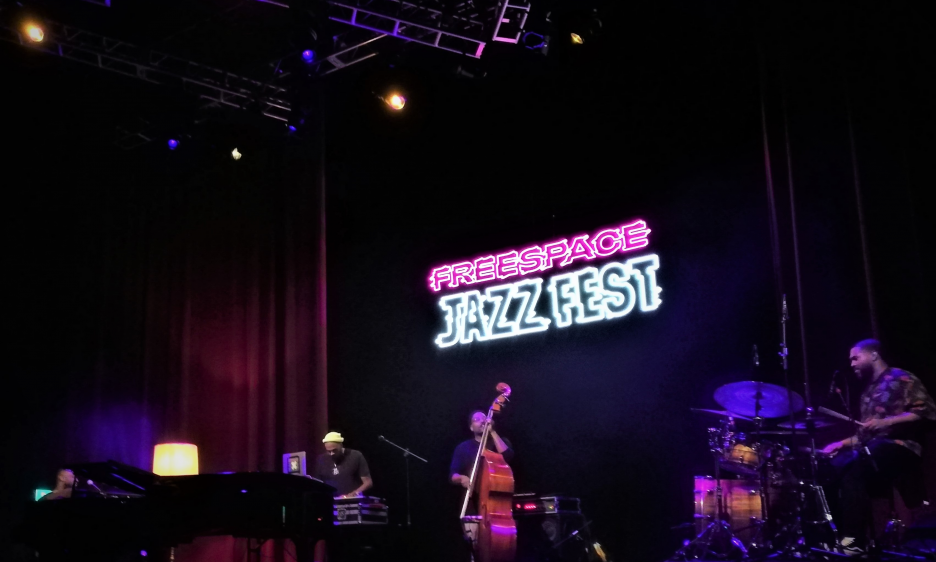 What can a visiting artist hope to offer a city in turmoil, torn apart and bleeding from months of violent unrest? Distraction, escape, respite— sure, but just maybe reflection, too. Robert Glasper couldn't have known that almost exactly 12 hours after he left the stage in Hong Kong, an unarmed 21-year-old protestor would be shot in the stomach at close range by police, the ugliest moment in 22 weeks of ever-uglier clashes. But Glasper did channel and even offer transparent support for the anti-government cause.

"I know it's some fucked up times," the pianist acknowledged from the stage before playing a note, unofficially dedicating the "kinda fitting" opener, Radiohead's "Packt Like Sardines in a Crushd Tin Box" to the everyman caught in the crossfire—the song a plea of the "reasonable man" who realizes "After years of waiting / Nothing came," in lyrics the pianist imperfectly sings himself.

Vocoder left at home, Glasper was backed by his longstanding acoustic trio, with one important addition: DJ Jahi Sundance, who grabbed the elephant horns head on, with a Cantonese collage of samples littered with commonplace protestors' slogans. The first spin of si doi gaap ming—literally, "revolution of our time"—induced a zealous eruption of applause. In an era when Western brands from Calvin Klein to Marriott International to even the NBA kowtow to the Chinese Communist Party, it's a weightier sentiment than it might sound, but one not unbefitting an artist as unafraid of ruffling feathers as he is spotlighting societal ills, musically and otherwise.

"Nice and dark," Glasper ordered of his piano from a soundman. Glasper's dual domination of the fields of jazz and hip-hop was no accident: He had it all mapped out in advance. As he told AP in 2017: First he would "make some straight-up jazz records" that let him "transform into other [beep]." And so it was, after establishing his muso chops with a string of acoustic albums, he crossed over decisively with 2012's Grammy-winning Black Radio (Blue Note, 2012), an almighty contacts-raiding, Rhodes-rolling, exercise which marks the greatest symbiotic melding of jazz and hip-hop to date, blessed with star turns by everyone from Erykah Badu to Yasiin Bey (AKA Mos Def).

The ever-humble pianist was explaining the apparently not-quite-ironic cover of his swagger-tastic new mixtape Fuck Yo Feelings— which features Glasper topless on a throne. But if that release represented his loudest and least subtle embrace of the hip-hop idiom, Glasper's Hong Kong performance suggested the closest reconciling of his worlds to date. Rather than just simply splitting time between his acoustic trio and electric Experiment—see the two conflicting but complementary halves of the wonderful Double Booked (Blue Note, 2009)—DJ Sundance sat in with both groups, offering samples, soundscapes and scratches.

Arriving fresh from a 56-show residency at New York's Blue Note Jazz Club, there was a brazen cheek and breakneck telepathy to the groove-painting that unfolded, Glasper unravelling riffs and changes for long enough to be registered, recognized and rejected, his most hummable hooks— "Calls," "Ah Yeah" and "Gonna Be Alright (F.T.B.)"— tantalizingly dangled but rarely dwelt on. Deep in bass line and breakbeats, longstanding acoustic cohorts, bassist Vicente Archer and drummer Damion Reid did't play catch up so much as continue their cyclic nod, intuitively evolving to the shapes and textures Glasper threw out at often eight or even four bar intervals.

A tauter tightrope still danced between the beats, when the unaccompanied pianist irreverently rambled his way across the keys with the frustratingly flickering focus of a talkaholic drunk, flitting between scurrying squirrel runs, languid, homely standards progressions, zig-zagging Monkish chromatic turns and cartoonish honky-tonk rocking in the pidgin mishmash of a multilinguistic speaker blending tongues.

This spellbinding 80 minutes marked the close of Hong Kong's first Freespace Jazz Festival—semi-inaugurating the West Kowloon arts space of the same name—itself an event which morphed its concept and ticketing to meet the city's troubled times.

A night earlier the paid program was headlined by a sonically distinct but equally 21st century piano trio GoGo Penguin, who's taut structures and stark lack of ornamentation marked a counterpoint to Glasper's restless showboating. "Jazz for the post-rock generation," was how I sold it to a friend: Built around frenetic drum cycles and precise piano arpeggios, the British group succeeded in integrating both the earnestness of classical minimalism and the cerebral abandon of the dancefloor into their dense, dynamic arches.

Cold, steely and detached, with little room for improvisation and less for the mind to take flight, it's an intoxicating sound on record, conjuring a claustrophobic intensity befitting a morning commute or frenzied study session— but live, the music's sameness and rigidity feels overpowering, and just a little bit bleak. Once more, a prescient booking for time and place, perhaps.