By Doug Collette
May 21, 2017
Sign in to view read count
Robbie Robertson's Testimony and Michael Nesmith's Infinite Tuesday are both illuminating books, but only in decidedly constricted fashion. The insight each man offers into their respective timelines, as part of and apart from their famous groups, passes through filters of which neither author are wholly cognizant. The lead guitarist and chief songwriter for The Band sounds almost as guileless as his counterpart from the Monkees, but both men (and/or their respective editors) evince artful means in devising a particular slant that matches the writers' semi-detached emotional approach. Certainly it's a writer's prerogative to adopt a specific stance for such works of writing, so while both Robertson and Nesmith come across more than a little disingenuous, even that attitude offers a certain enlightenment to readers. 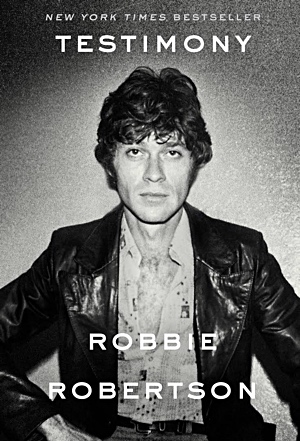 For all its faults of attitude (read 'platitude'), Testimony succeeds because Robbie Robertson knows how to tell a story and his book is no more or less than a succession of stories. Without much contextual content, it's anecdotal to a fault, suggesting it's merely a collection of polished excerpts from a personal journal. But his tales are far more often than not vivid on their own terms, the depiction of the characters and their adventures within his personal history and that of the Band's rendered with skill if with a bit pretension as well; while Robertson's repeated use of aphorisms and cliches at the end of segments within each chapter doesn't effectively serve the purpose of summarizing his themes, his clumsy approach can't lessen the impact—that's how vibrant is his source material, such as his presence in the recording studio watching Ray Charles work (and, apparently, play as well).

Still, many later passages of Testimony find the author sounding more than a little slanted in his assessment of the band dynamic. His offhanded comments about his own drug preferences sound flip after excoriating bandmates for their own substance (ab)use, while his political observations regarding protest against the Vietnam War ring hollow given the Band's abdication of any political stances (except the support of Jimmy Carter). Ultimately far from forgiving of Levon Helm (notwithstanding the Arkansan's own self-professed irascibility) Robertson is deliberately sympathetic to his bandmates Richard Manuel or Rick Danko, sufficiently so, in fact, to rationalize his reasoning for leaving the road after The Last Waltz (Warner Bros., 1978) (an experience for which he's somewhat disingenuously at a loss for words to describe), but also magnanimous enough to support their decision to tour again. 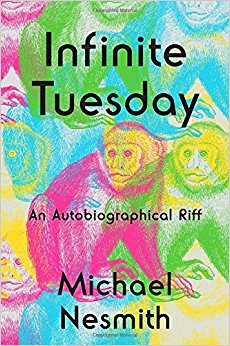 No passages in Testament sound so earnest or honest as those in which Robbie Robertson recognizes the education he forsook to become a working musician at sixteen and subsequently begins reading as voraciously as he consumes classic cinema, the end result of which scholarly rigors is a thesis that is the Band's second eponymous album. Michael Nesmith relates no such truly transforming turning points in his book, despite the fact his life, as he tells it, is one personal paradigm shift after another. Yet he never changes in the wake of such occurrences, whether financial or romantic, and thus sounds like the same self-serving soul at the end of Infinite Tuesday as at the beginning.

No doubt it'd be risky to use his long-term membership in the Monkees, including their sporadic reunions with and without him, as touchstones in his story of entrepreneurial and philosophical pursuits. But if for no other reason than contrast, and more probably as a benchmark of his growth (or lack thereof), even short intervals devoted to the vagaries of that faux band would be illuminating for both the reader and Nesmith; perhaps that's why he chooses to ignore such themes, after relating the sequence of events that led to the movie Head (according to Mike designed to destroy the pre-fab group once and for all once their popularity faded): to utilize this particular filter would highlight a lack of growth on his part to which he'd prefer not to admit.

All that said, An Autobiographical Riff is as easy a read as its subtitle implies. Nesmith maintains a breezy, colloquial tone, even when discussing the portentous implications of his mysterious physical malady late in the book. Even still, as when he relates the emotional tumult (and karmic payback?) arising from his romantic abandonment, the author speaks with a reserve that turns his confessions as well as ruminations hollow: as self-deceiving in his own way as Robertson, Nesmith may think this tone, like his continuous and regular overplaying of his lack of business acumen, renders him humble, but Infinite Tuesday hardly ever sounds more devoid of feeling than during those interludes. Likewise, his shepherding of the foundations funded by the bequeathed wealth of his beloved mother (whose fortunes derived largely from her invention of 'Liquid Paper') is simply the most obvious example of a self-serving (and selfish) mentality that leaves Michael Nesmith an unsympathetic figure.