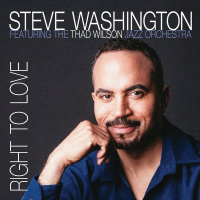 Steve Washington is a versatile and personable singer, the kind you might hear in a lounge, bar or bistro and think to yourself, "Hey, he's pretty good." And he is. Pretty good, that is. On the other hand, he's not a singer whose name you're likely to see at the top of any charts, jazz or pop. He is one of a large number of talented singers who are widely known and appreciated in their own backyards, in this case the Washington, DC, area.

That's not to say that Washington hasn't had a wide-ranging and productive career. Besides sharing the bill with such relatively well-known groups as the Drifters, the Supremes, the Village People, Gary Puckett and others, he has sung in musicals (West Side Story, Oklahoma!, Merrily We Roll Along, Godspell!) and acted in dramas from Shakespeare (A Midsummer Night's Dream) to Broadway (Miss Saigon, Les Miserables, Phantom of the Opera). Washington has traveled the world, and his big-band cabaret acts, "Nat & Sammy Remembered" (a fond tribute to Nat King Cole and Sammy Davis Jr.) and "Rhythm, Blues and Broadway" continue to draw large audiences on land and sea (via cruise ships).

Right to Love is Washington's second CD (the first, Secretly, was released in 2002). Unlike that earlier recording, this one includes none of his original compositions, focusing for the most part on standards, along with Luther Dixon's "I Was Telling Her About You" and Lalo Schifrin / Gene Lees' "The Right to Love." The choice of material might best be described as uneven. If, for example, you are not Billy Eckstine and want to open with a universally familiar song, why choose a decrepit warhorse like "Caravan"? Why not revisit "Without a Song" or even "Alexander's Ragtime Band"? Well, "Caravan" it is, and Washington does his best to make it fresh and exciting, as does the Thad Wilson Big Band.

"Corcovado" and "The Lamp Is Low," which follow, are fine, laying bare Washington's mellower side, but he can't match the late Joe Williams' swagger and charisma on "Alright, Okay, You Win." "Avalon," introduced way back when by Al Jolson, is a bright and swinging counterweight to the slower-paced and essentially indifferent "Telling Her About You" and "Right to Love." There are two versions of Jimmy Webb / Adrian Dover's maudlin "MacArthur Park," the second of which, listed as a "bonus track," runs for more than five minutes and lengthens the album's playing time to thirty-nine.

As noted, Washington sings well, the charts are tasteful, the Wilson band at ease in its supporting role. There is, on the other hand, no special ingredient that sets the album apart from many others of its kind. It is simply nice to hear.