By Glenn Astarita
August 2, 2020
Sign in to view read count 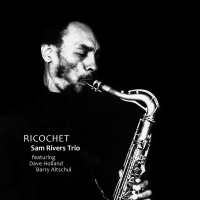 Other than new product framed on forward-leaning jazz and improvisational artists, this record label annually resurrects gems from the vaults, evidenced on this adrenaline- fueled recording of the late great saxophonist Sam Rivers and his superstar trio. This follows the label's release of Zenith (No Business, 2019) which is Rivers' quintet caught live at a Berlin venue in 1977.

The saxophonist and his trio are captured at San Francisco's legendary Keystone Korner club. Hence, they shoot for the stars during the sole fifty-two minute track "Universal Message." Back then, Rivers was active in New York City's fertile loft scene amid a host of creative solo albums and many other sessions, garnering praise, and a march to the upper strata of progressive jazz. Here, the iconic trio conveys a level of camaraderie and gamesmanship that transforms your listening space into a virtual live event. The respective artists' stunning fluency and micro- second paradigm shifts are often tempered with Rivers' switch to the piano, where he combines Cecil Taylor-like rhythmic bombardments with honeyed melodic phrasings.

Rivers and Holland generate counterbalancing propositions in continuous fashion via the former's dynamic phrasings, although he occasionally morph matters into brief ostinatos and affable harmonic contents, so it's not a wanton, undisciplined free-form extravaganza. However, they do conjure notions of a beauty and the beast style approach, perhaps outputting the societal underpinnings of the turbulent 1970s. Moreover, drummer Barry Altschul resides as a major force via his brisk patterns and polyrhythmic furies, tempered by his colorific cymbal shadings and acute support. But if you feel that Dave Holland is one of the great bassists of all time, mainly based on his more recent work, then check out his seemingly supernatural arco outbreaks and web- like single note inventions, often performed with torrid manipulations and technical mastery to die for.

The performers will gradually raise the pitch to cataclysmic heights, sparked by the leader's blustery and exhaustive choruses amid circular interactions, Holland's sawing and streaming staccato notes and the drummer's snappy rimshots, lyrical progressions and a whizzing solo towards closeout. Indeed, this is essential listening, and an educational tour-de-force for the younger crowd who have not been indoctrinated to Rivers' early mind-bending recorded output.