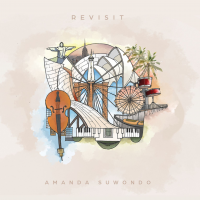 It's genuinely odd and oddly gratifying that a young native Indonesian whom, after traveling to LA to study with Tamir Hendelman, mentor in New York with Christian Sands, and who now calls the land down under home, can remind one of America's lost, defiant lilt and how badly we need to get it back.

Gigging around Sydney has brought Amanda Suwondo many an accolade, and those early and late sets have bequeathed the pianist with a graceful, Dave Brubeck-ian touch, an approach to the the music with an emotive, an intuitive sense of worldliness that is particularly American. Sure the whole world swears by jazz, but we're out of step. To all our good fortune, Suwondo and her rhythm mates, pop borne double bassist Muhamed Mehmedbasic and ginsu sharp drummer Gian Timothy Gho's swear by it big time too.

A thoroughly engaging collection, Revisit's seven spritely and curious Suwondo originals, each owe back but confidently push forward. "All The Way To Chino" is full on Brubeck with a sly, Afro/Cubano bounce to its step. That springiness takes on a supremely sparkling and agile effervescence with "Belleza," written for a Brazilian college friend. Inspired by Aaron Parks, "Santa Monica's Night" is equal turns Parks' industrial texture and Suwondo's own vivacious sense of Dizzy's Place swing and romance. Robert Glasper's spacious melodicism is explored warmly and intimately on "Reminiscence."

Producing the session herself to give herself, Mehmedbasic, and Gho ample space to lift our dour spirits (each track clocks in at over seven minutes), Revisit (the full album as well as its namesake final track) is a crisply performed, under-the-radar recording that deserves to be more than a blip on a screen. Listen in.