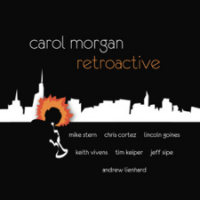 Always a serious music maker, Morgan lets her copious red hair down and has fun. Her open bell tone is full and tart, even when she pinches it hard. She mixes originals and standards with absolutely no regard to theme or content, preferring to provide these elements with her smart arrangements and formats. The first two pieces out of the chute set the pace of the remainder of the recording. "Stern Language," a Cortez original, features staccato riffs in the head that give way to serpentine and elastic guitar lines full of free, funk, and rock. Morgan's "Melody's Milieu" contrasts with the Cortez composition as a pastoral ballad, featuring bassist Keith Vivens and with Cortez playing acoustic guitar.

Morgan sounds like the Aaron Copland of the trumpet, molding her approach to best fit the environment of each song. She takes a wide open approach with "Melody's Milieu," playing long and sumptuous melodic lines, gently swinging to Cortez's waltz pattern. Morgan then blows the dust off of the Youman-Caesar chestnut "Tea for Two"—and this is not your mother's Art Tatum or Anita O'Day version either. Fully updated and featuring a Lincoln Goines electric bass solo held together by Mike Stern glue, this "Tea for Two" parties like it's 2999. It would be a superb soundtrack addition to any futuristic noir.

Kansas Joe McCoy and Memphis Minnie's "When The Levee Breaks" is recast a light year beyond Led Zeppelin's treatment of the same, again achieving a futuristic noir-funk made dirty with Cortez's sinew slide guitar and angular soloing. Andrew Lienhard's Fender Rhodes provides just enough punch to get Miles Davis's attention from the hereafter. With its slight Latin desert flavor, imparted by Morgan, this "When The Levee Breaks" would perfectly frame a 21st Century Sergio Leone film.

Carol Morgan firmly establishes herself with Retroactive, thanks to her fearless experimentation within the melodic confines of that which is pretty whilst still being edgy. She still favors spare instrumentation, which serves to provide her and her soloists the space necessary to properly explore the music. While not a complete surprise, Retroactive is a refreshing, cool wind.

Stern Language; Melody's Milieu; Tea for Two; When the Levee Breaks; To Be Continued; Into It; Wholly-O; Jitterbug Waltz; Jam; Spirit of God.