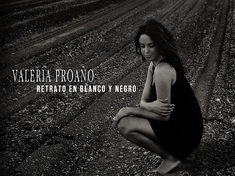 Valeria Proaño began her professional singing career at the age of 15 and for the past 16 years has been performing in the U.S. and around the world, singing jingles for TV and radio as well as performing as backup vocals for major Latin music artists. Retrato En Blanco Y Negro (portrait in black and white) is the Miami-based singer's long-awaited debut, blending an interesting selection of pop and jazz classics with traditional and contemporary Brazilian flavors, as well as Latin music standards sung in English, Spanish and Portuguese.

Born in Quito, Ecuador, to a Cuban mother and Ecuadorian father, Proaño's rich cultural heritage has served her well in absorbing a variety of musical styles from Latin to jazz. Produced by percussionist Carlomagno Araya, this first effort has attracted an A-list of players, among them flautist Nestor Torres, saxophonist Ed Calle, and trumpeter Ray Vega, leading an ensemble that also features standout educators Mike Orta and Jamie Ousley, bassist and T.I.E Records President. On several pieces, the music is augmented with strings from the Florida Philharmonic Quartet.

Paying tribute to her Ecuadorian side, the pasillo "Rosario De Besos" begins the music as the singer sings the lyrics in Spanish, featuring Torres, supported by the string quartet's lush sounds. Arranger Hugo Sanchez provides an interesting twist to the standard "Someday My Prince Will Come," where Proaño uses her powerful vocals on a dynamite Brazilian-flavored rendition, featuring steady and firm bass lines from Ousley, and Vega on flugelhorn, producing the most swinging piece of the album.

Antonio Carlos Jobim's title piece is certainly in stark contrast to the majority of the repertoire, sounding much more like a soft contemporary jazz piece, riding the saxophone voice of Troy Roberts. Very comfortable with the Brazilian genre, Proaño sings one more Jobim song, this time singing the lyrics of "Agua De Beber" in Portuguese. Seal's 1994 classic, "Kiss From a Rose," gets a refreshing new look, featuring Proaño's stylish approach and Robert's sizzling tenor phrasings.

Other Latin American classic include "Tu Mi Delirio," the Argentinean love song "Yo Vengo a Ofrecer Mi Corazon," and "Soy Pan, Soy Paz, Soy Mas" featuring Calle's soprano voice. Proaño and crew end with "My Foolish Heart," clearly the defining piece of the album, with Proaño, in a superb performance, staking her claim for consideration as one of the finest young songbirds on the scene today. The impressive Retrato En Blanco Y Negro is not so much a Latin jazz album as it is an album of Latin and jazz music, packaged into one compelling and enchanting disc.