Saxophonist Ed Calle is known for his extraordinary ability to play bebop, Latin and contemporary jazz, and pop. Born in Caracas of Spanish parents, it was obvious from the start that he was a natural player and now, Calle can be heard on hundreds of recordings both as a sideman and soloist. He appears on Grammy-award-winning albums by Frank Sinatra, Vicky Carr, Arturo Sandoval, and Jon Secada, as well as on numerous television and motion picture soundtracks. He also has recorded and performed around the world with such artists as Gloria Estefan, Julio Iglesias, Michael Bolton, Bob James, Bobby Caldwell, Rhianna, Extreme, and Vanessa Williams. Among his many solo recordings, "Ed Calle Plays Santana" garnered a Latin Grammy Award nomination in 2005

Miami is a melting pot where people and musics of all stripes share space and influence, cross-pollinating to create a sound and culture like no other. That fact provides the foundation for this upbeat collection. Blending elements sourced from numerous musical styles and languages including salsa, pop, samba, jazz and R&B, among others, multi-instrumentalist Camilo Valencia ... 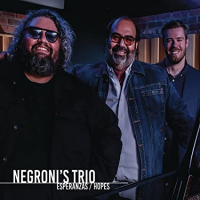 The three-time Latin Grammy-nominated group Negroni's Trio unveils their eleventh album titled Esperanzas / Hope, offering a host of consistently bright and sizzling Latin rhythms over vocals and augmented instrumentals featuring other players all on a pallet of six originals and three cover songs. Considered one of the finest trio bands on the jazz landscape today, ...

A proponent of the more relaxing side of the jazz spectrum, pianist and keyboardist Mike Levine presents his fourth album as leader, offering thirteen primarily original pieces falling decidedly within the smooth jazz category. A talented composer, Levine's music seems to eschew the core jazz tenet of improvisation in favor of catchy melodies perfect for those ...

The malicious coronavirus pandemic that brought most of the world to its knees in 2020 has spawned the use of several reanimated words including “virtual," whose meaning is “sort of here but not really," as in virtual video chats, conference calls, exhibits, films and even musical performances. “Virtual" has spread its tentacles into almost every walk ...