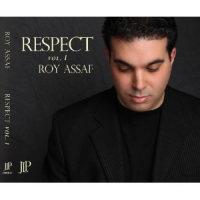 Innovation and as-yet-unheard-of ideals tend to sell headlines in jazz, but they mean nothing without respect for those who paved the road to the present. Many young emerging talents seem content to walk into jazz without doing their due diligence in discovery and digestion, but that often puts them in a peculiar position of being a mouthpiece for a music that they don't fully embrace. Jazz is certainly the here-and-now, but it's also the there-and-then, and that's a concept that lives at the heart of pianist Roy Assaf's work.

For his debut album on Jazz Legacy Productions, the Israeli-born, New York-based pianist takes on the history of the music, tackling ten songs associated with ten important piano personalities, and adding two of his own for good measure. The usual suspects, like Thelonious Monk, Herbie Hancock, and Chick Corea, are given acknowledgement, but Assaf avoids the usual material associated with these legends; "Blue Monk," "Watermelon Man" and "Armando's Rhumba" are nowhere to be found. Instead, Assaf delivers "Brake's Sake," minus Monk's percussive touch, "Textures," which comes off as atmospheric and airy with bass clarinet, guitar and wind chimes rounding out the sound, and "Eternal Child," which captures Corea's essence and Spanish heart.

Elsewhere, he nods to Count Basie with a simple and appealing "Easy Does It," honors Keith Jarrett with a spellbinding, but misspelled, "Prisim," and gives Oscar Peterson a moment in the sun with "Hymn To Freedom." The majority of the material is built around the trio of Assaf, bassist Reuben Rogers and drummer Gregory Hutchinson, with an occasional guest thrown in for good measure, but McCoy Tyner's "Fly With The Wind," along with the aforementioned "Textures," benefit from big casts. Bassist/producer John Lee arranged both of these numbers and he deserves a great deal of credit for bringing out the best in two songs that have the potential to sound dated but never fall prey to that outcome.

Assaf's willingness to inject his own personality into these songs is notable and wise. He might not have the chops of a Peterson, power of a Tyner or duende of Danilo Pérez, but nobody else truly does either. Those personal, identifying characteristics defined those artists and, while Assaf honors them here and he's more than happy to have some of their magic rub off on him, he gets the fact that he can't be any one of them. He charts his own course through their music and it usually works.

After all the tributes are said and done, he delivers two of his own pieces to prove the point that he's his own man. The gentle and poetic "Guardian Angels" and the devious "Gozo" cap off a fine a collection of music. Respect, Vol. 1 takes on jazz as all that it was, all that it is, and all that it can be, and who could ask for anything more?