By Budd Kopman
November 6, 2009
Sign in to view read count 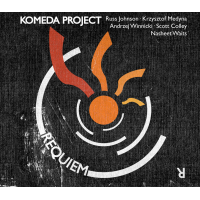 With the magnificent Requiem, pianist Andrzej Winnicki and saxophonist Krzysztof Medyna solidify and enhance their reputations as the prime promoters of the essential music of the Polish pianist and composer Krzysztof Komeda (1931-1969). Komeda is widely recognized as the founder of modern Polish, and in a wider sense, European modern jazz. That he worked in Poland under Communist oppression is important. At its heart, jazz refuses to be pigeonholed, and it both allows and demands that its practitioners be utterly and freely themselves. It is this freedom that makes jazz subversive and the reason that totalitarian governments have always attempted to suppress it, since free minds cannot be controlled.

As leaders of the Komeda Project, Medyna and Winnicki remember Poland under the control of the Soviet Union, the clandestine underground sessions, the danger of daring to express oneself, and hence fully appreciate the freedom of the United States. Freedom, however, is not anarchy and real freedom is underpinned by rules, both explicit and implicit. In music, the rules are the mixture of tonality by key or mode and its derived harmony, melody or thematic fragments and rhythm. The nature of the music is the mixture of each part's individual strength, and result of their interaction at the lower musical level and the higher level of the players themselves.

Requiem contains, most wonderfully, two of Komeda's greatest compositions, "Night-time, Daytime Requiem" (listed as three tracks, which, however, run together) and "Astigmatic." Those who know the originals will appreciate Winnicki's arrangements as being fresh while acknowledging the past. Komeda's knack of creating memorable, highly emotional thematic phrases and then building large, logically inevitable structures that support vigorous improvisation is directly audible here.

The band's playing, individually and as a group, is superb. Medyna is always fiery and white-hot but under control - full of passion even his slower lines. This contrasts nicely with Winnicki's cooler playing. Russ Johnson, who has been with the group since its inception, stands between Medyna and Winnicki, playing the hot trumpet and cooler flugelhorn. The core trio is supported by the very sharp and incisive rhythm section of bassist Scott Colley and drummer Nasheet Waits. Medyna writes that they were chosen precisely for two reasons: they were not familiar with Komeda and have extremely sharp reflexes. Medyna wanted the music to combine the "sound of surprise" with the opposite of its internal logical structure, and on that note Colley and Waits deliver.

Crazy Girl (WM Records, 2007), the Komeda Project's previous release, was a welcome re-introduction to the work of Komeda. From this point of view, Requiem can only be termed as essential.