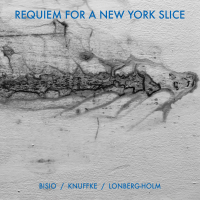 This remembrance of Mike Panico, the owner, producer, and partner with Kevin Reilly of Relative Pitch Records was recored just three days after his death. Kudos to Iluso Records for honoring their fallen colleague with this very special recording. The trio heard here are bassist Michael Bisio, cornetist Kirk Knuffke, and cellist Fred Lonberg-Holm. Knuffke and Bisio recorded the stellar duo Row For William O. (Relative Pitch, 2016) for Panico and an additional seven other sessions in total.

This wholly improvised date (maybe better stated as "holy" improvised) opens with "Introit et Kyrie," as Bisio's bowed bass mimics the sound of sea birds with Lonberg-Holm scratching colors on the soundscape and Knuffke's mournful cornet yowling. The entire sessions gives off the same energy as John Coltrane's iconic recordings "Alabama," "Lonnie's Lament," and the album Meditations (impulse!, 1966). Did the trio reach that depth? It certainly sounds like it.

It is hard to find three more expressive musicians. Bisio being one of just a few bassists that can match the energy of Matthew Shipp. Lonberg-Holm's cello can be heard on over 300 recordings, with heavyweights such as Peter Brötzmann, Ken Vandermark, and Joe McPhee, and Knuffke maybe (no, is) the most expressive cornetist working today. That expression is dialed to max on "Sanctus" where the cornetist makes a joyful noise over a pair of bowing accompanists. The music roams into Aaron Copland's "Appalachian Spring" territory for an avant-folk departure. Listeners surely will draw their own conclusions here, the themes of loss and celebration always allowing for that. "In Paradisum" might be the saddest and most beautiful piece on this recording. Bisio opens with huge reverberating pulled notes while Knuffke squeezes upper register tones before Lonberg-Holm's cello slices skidding notes across the bandstand. Halfway through the music pauses as if to reflect on the loss, then bows are applied as tears are shed.