BY GEORGE KANZLER
August 13, 2008
Sign in to view read count 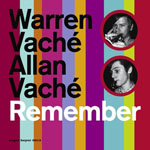 The Vaché brothers, cornetist Warren and clarinetist Allan, grew up in New Jersey in a hotbed of revivalist trad jazz. Their father, Warren Vaché Sr., was a bassist and writer-editor (a bio of Pee Wee Erwin, the early Chicago-style trumpeter, and editor of Jersey Jazz, a newsletter) and one of the Jersey neo-traditionalists who helped kick-off revivals with the annual Pee Wee Russell Memorial Stomp. But while the brothers were steeped in trad jazz—an experience that has given them a deep appreciation of melodic improvisation—and Allan spent long periods working in trad bands in San Antonio and Orlando, this 1998 date is no trad jazz showcase. Reflecting the eclectic interests of the two brothers, especially Warren, it's a swinging mainstream outing with both timeless and modern touches. Joining the Vachés are the extremely versatile cohorts like Howard Alden (guitar), Eddie Higgins (piano), Phil Flanigan (bass) and Ed Metz Jr. (drums).

"Just Friends," a tune associated with bebop and modernists, is given a muscular workout, centered on the two brothers trading increasingly shorter leads and then engaging in a spirited tangle of simultaneous soloing, Alden joining them in an update of New Orleans polyphony. Later, another modern classic, Miles Davis' "All Blues," is given an idiomatic, modal rendition with Harmon-muted cornet. Warren's affection for small group chamber jazz is realized on a lovely duet for piano and flugelhorn on "London by Night" and a romp through Bud Freeman's "The Eel's Nephew" for cornet, guitar and bass. Allan's alternately bright and woody tone and clear articulation make his feature with the rhythm section, a fast "I'll Remember April," memorably swinging.

But the album's most significant tracks are three pieces of circa 1940 Ellingtonia: "Just Squeeze Me" is jaunty and insinuating, with wah-wah muted cornet and spunky clarinet; "Cottontail," beginning niftily with Ben Webster's orchestrated solo by guitar and bass, is a buoyant romp and "What Am I Here For?," invigorated by stop-time breaks and dropouts like clarinet solo with just bass or introductory melody chorus from just rhythm section is refreshingly appealing, timeless Ellington.