By Karl Ackermann
August 25, 2014
Sign in to view read count 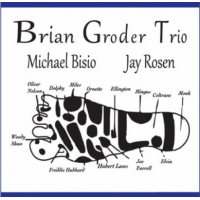 A long-time fixture in the his native New York City jazz scene, trumpeter and flugelhorn player Brian Groder has devoted a considerable part of his career to the frequent use of free-form approaches. His previous trios have included bassist Dominic Duval and drummer Newman Taylor Baker. Groder has also worked with trumpeter Taylor Ho Bynum and many others. On Reflexology he surrounds himself with very like-minded improvisers in bassist Michael Bisio and drummer Jay Rosen. Bisio has led virtually every level of formation from duo through sextet and is a prolific composer. He's also a member of Matthew Shipp's trio and a regular performer on both US coasts. Rosen—who studied with Barry Altschul—is a member of Trio X with trumpeter/saxophonist Joe McPhee and Duval.

Groder's liner notes explain the relaxed perfectionism that went into the creation of this album, first with he and Bisio spending months in tweaking and retooling pieces and finally bringing in Rosen to complete the sound. The title Reflexology may imply a specific scientific bent in the eight original Groder compositions (plus one cover); the correlation may be as simple an action/reaction analogy. In the case of the opener "What Not" there is clear group interaction in the midst of individual improvisations. Groder always operates from some semblance of a central theme and musicians are skillfully adept at straying and then finding their way back. At the heart of "Hexadox" there is a swing rhythm and it's Bisio who breaks away for an extended solo before Rosen deftly reunites the bassist and Groder.

There are bluesy elements present on Reflexology as well and particularly evident on "Some Other Where" and "Deepening Appearances" though the trio mixes styles effectively. "Veer"—being more abstract—lives up to its name as Rosen seems to skitter around to the edges of the piece while Groder and Bisio punch up the sound with their often discordant and distinct contributions. "Tarried Breath" goes to a completely different place with Bisio's atmospheric bowed bass and Groder's nourish horn creating a threatening darkness. Rosen taps around like mysterious footsteps running toward (or away) from the darkness.

As fine as all the performances are on Reflexology, Groder seems to have saved a special effort for his mentor JoAnne Brackeen's "Haiti-B." His horn soars with an extraordinary and emotional energy, only staying earth-bound through the anchoring of Bisio and Rosen. Little of Reflexology swings in the traditional sense but neither is it atonal as a rule; rather it is clean and un-wasted playing where every idea comes through and each is relevant. Though the instrumentation is uncommon the imagination and empathy of the players make it accessible and a pleasure to listen to.

What Not, Hexadox, Some Other Where, Haiti-B, Veer, Tarried Breath, Deeping Appearances, Opposing Motion, Snooker.