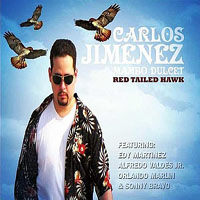 Latin jazz flute players aren't exactly commonplace, but artists like Dave Valentin, Nestor Torres, Bobby Porcelli and, more recently, Mark Weinstein have helped to widen this avenue of instrumental exploration. They've paved the way and opened up a world of possibilities for fine and feisty flautists of the present and future to flourish in danceable domains. Carlos Jimenez is one of the beneficiaries of their trailblazing.

Jimenez, who was brought up in New York, moved to Puerto Rico at the age of six and returned to the Big Apple to further his musical studies in 1995, has absorbed the work of his instrumental forbearers and peers, but he's no copycat. Red Tailed Hawk presents an artist who stands firmly on his own two feet, which are both likely moving to the tasty grooves that power this music.

Vamps and a steady percussive flow are part and parcel for these pieces, which tend to value feel and solo work over harmonic movement. While this can cause interest to wane on occasion, the personalities involved usually keep this problem at bay with a steady flow of excitement and energy. Jimenez delivers bright, perky solos that are fun-filled snapshots of his chipper musical persona and he aligns his axe with different front line allies from track to track. Trumpeter Peter Nater proves to be a strong soloist and simpatico partner, though his horn has some occasional intonational rub with the leader's flute ("Goza Nena"). Likewise, Lewis Kahn is a highly skilled double threat, capable of creating a stir with trombone or violin. While Guillermo Perez's guitar is only heard on "La Playa," it adds volumes to that track.

When Jimenez isn't doling out sweet flute treats, he puts his instrument down and sings. His voice, like his flute, cuts straight to the heart of the music and proves to be an equally powerful instrument. The real Red-Tailed Hawk may be a bird of prey, but Jimenez's music harbors no threat. It merely invites hip shaking and rewards open ears.