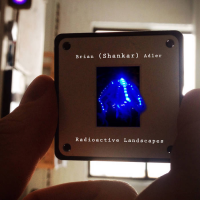 As was evident on his previous EP releases from 2016, Binary and Mysteries of the Deep, percussionist Brian Adler enjoys working with conceptual frameworks for his compositions. On Binary, he explored the possible interactions between human-and computer-based creativity, and on Mysteries he drew thematic inspiration from the world of Eastern spirituality. These investigations allowed him to explore his intersecting interests in a range of musical styles and genres, not to mention instrumentation, with Indian percussion and classical forms utilized within a post-bop jazz architecture. On his current release, Radioactive Landscapes, the overt gestures to Indian classical music are somewhat muted, but a heady conceptual terrain remains, as Adler charts a world that seems both recognizable and also in a process of disorienting flux, through mutations alternately subtle and jarring.

Adler's bandmates here are the same personnel he used on the Mysteries of the Deep EP. With vibraphonist Matt Moran, guitarist Jonathan Goldberger and pianist Santiago Leibson sketching the melodic contours of the pieces and bassist Rob Jost helping to define the rhythmic foundation with Adler, the group has an effective synergy, especially important given the twists and surprises the pieces take as they evolve. All the tracks have a strong atmospheric undercurrent, with effects developed through Adler's percussive techniques (metal sculptures, for instance) and Goldberger's subtle shadings. Then there's the disconcerting, abrupt transitions that occur during the pieces: whereas "Gowanus 40" initially settles comfortably into a relaxed groove sustained by Jost's ostinato line and strong playing by Moran and Leibson, disruptions emerge through what sound like tape- loop effects, along with a competing musical structure that gradually rears its head and intrudes on the dominant theme, this one with Goldberger's growling guitar in the lead, as the piece starts to break up and its momentum is interrupted, only to return to a sense of order and quietude by the conclusion. The overall experience of the piece is to feel unsettled, as one is never quite sure which musical path the track will end up following: indeed, much like a landscape that seems both familiar and disturbingly strange at the same time.

The same disconcerting sensations are experienced on the other two tracks. A plucky melodic statement by Moran and Leibson serves as the initial basis of "Watertown 40," with Adler's interjections on ghatam giving the piece its rhythmic direction before Goldberger and Jost join in with their own contributions. The piece gradually becomes more complex, as lines jut out and intertwine and the dynamic tension builds, when suddenly we've gone into another musical world altogether: a bluesy motif from Goldberger, whose jagged, fuzzy solo rides over a loose groove set down by Adler and Jost, one over which Moran and Leibson gradually re-enter, and before we know it we're back to the original theme of the piece. It's a fascinating journey. And while "Nuearth 49," perhaps the most accessible track, has a fairly conventional melodic line, with Goldberger's guitar part again taking the lead, occasional stops and pauses lend an eerie feel to the piece— and here too, changes in direction prevent us from getting too comfortable, as new musical themes emerge midway through the piece and alternative rhythmic gestures intrude before the original melody is re-articulated.

It's in the constant push-pull of familiarity and unfamiliarity that Adler's music works its magic on the listener. There's a lot to process here in a mere 16 minutes. A longer release would be welcome, of course—but with challenging musical ideas in abundance, this EP still gives a patient and dedicated listener a lot to contemplate and enjoy.