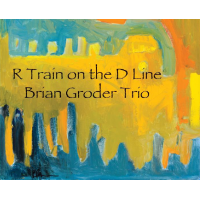 An album like R Train On The D Line is what separates jazz listeners from non-jazz listeners. The Brian Groder Trio plays the kind of composed yet improvised music that portends to go off the rails at any time, yet never does. And that may be the true definition of jazz.

Consider the audiences' double-take when Louis Armstrong put a trumpet to his lips to open "West End Blues." Satchmo broke all the musical commandments with his improvised phrasing, yet his internal logic rewrote the possibilities. Ninety years later, Brian Groder opens "Asterix" with the same spirit, plus his collaborators, bassist Michael Bisio and drummer Jay Rosen, don't just accompany, they also go off script.

Non-jazz listeners walk away, jazz fans run towards this kind of interplay.

Like Trio X, which Rosen has performed in for years with Joe McPhee and Dominic Duval, this trio is one of the finest ensembles working in modern improvisation. The opening piece, "Quanta" sprints through multiple time changes with the stoic trumpet of Groder taking on all comers with a sharp, crisp champion sound. Groder's compositions give way to the individual voices, Bisio's on "Retooled Logic," where he pulls well paced notes before a bowed solo that layers a dreamy fog of pause over the affair and Rosen's mini-concerto of drums and cymbals on "Drawing In To Pull Away."

The two ballads "Isolating The Way" and "Whispered Sigh" relax the undertaking to allow the listener to more easily observe the trio's interplay. These demonstrate the band's affinity and rapport. This is indeed, jazz played at the highest level.