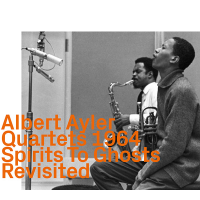 When did you first encounter saxophonist Albert Ayler's music? Not 'hear' because hearing was just part of the experience. Call it the shock of the new or just the discovery of a totally original sound, Ayler's music was a revelation. That first encounter will probably always be one of those "where were you when you first heard Ayler" stories to share with friends.

Enter Werner X. Uehlinger's Hat Hut Records and its new ezz-thetics label which, with permission from the Albert Ayler Estate, has remastered four of the saxophonist's 1964 recordings, Prophesy, Spiritual Unity, Spirits (a.k.a. Witches and Devils), and Ghosts (a.k.a. Vibrations). The latter two sessions from February and September are reissued here, with Prophesy, Spiritual Unity to be released shortly.

While Spirits was recorded earlier, it is more abstract than Ghosts. The explanation maybe that Howard and Henderson are not as technically adept as Cherry and Peacock. Ayler is satisfied working with fragments of his now famous compositions. Nonetheless, the two tracks which feature Grimes' jaw-dropping bass solos, especially "Witches And Devils," are fully formed.

The meat of this release are the six tracks with Cherry, Peacock, and Murray. "Ghosts," of which we are treated with two takes, is comfort food for the soul. Murray's clatter is an engine set at high idle while Ayler, Peacock, and Cherry vocalize the melody. Some fifty years later this music has become almost like psalms or holy anthems. But back in the day. where did Ayler's music emanate from? Was it from the sanctified church? The blues marches of New Orleans? Or maybe Albert Ayler was like Sun Ra, a visitor from another planet. In any case, this revelatory sound is as bone-chilling today as it was in 1964.