By MARK SULLIVAN
October 25, 2019
Sign in to view read count 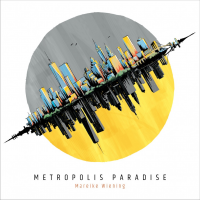 German-born drummer/composer Mareike Wiening makes her first full-length album and Greenleaf Music debut with Metropolis Paradise. This all-original program is a winning display of her composing, drumming and band-leading, with the help of a very sharp band. Returning from her earlier EP Crosswalk (Self Produced, 2015) are double bassist Johannes Felscher (a fellow Nuremberg native), Canadian guitarist Alex Goodman—now a New York resident, last heard from as a leader on Second Act (Lyte Records, 2017)—and tenor saxophonist Rich Perry. Pianist Dan Tepfer was a last-minute replacement for Wiening's regular pianist Glenn Zaleski (the result of a bicycle accident). The session had to go on as scheduled because it was the last chance to record at Brooklyn's storied Systems Two Studio: the album's last session was the final one to be recorded there before the studio shut down.

"Free Time" opens the set with a sprightly groove and a reflective melody, doubled by guitar and saxophone, with the leader on brushes. "2 in 1" begins with lovely unaccompanied piano (perhaps a reflection of Wiening's classical piano training). After the rest of the rhythm section joins in, rhythmic changes feature the drums. Then the tune opens up, featuring an ecstatic guitar solo. "For A Good Day" changes the pace with a lyrical waltz, giving Felscher a solo double bass spotlight.

"Misconception" sets its theme over a jerky rhythm, before giving free reign to Tepfer's piano and Goodman's guitar (much of his striking solo is unaccompanied, before the rest of the rhythm section joins in). The title tune has a minimalist feel, its long-tone melody set over repeated arpeggios. The solos feature call and response between piano and guitar before moving into a rubato saxophone solo, freely accompanied. Closer "Free At Last" begins freely, atmospherically: maybe this is the freedom meant by the title? But then it breaks into a rhythmic modal ostinato pattern, giving a feeling of release. A final rubato section provides the performance with balance.

Metropolis Paradise is an impressive debut. Wiening's compositions are rich and varied, and she has established a relationship with a group of players that are in tune with her approach and each other. Hopefully we will hear more from them.