By DAN MCCLENAGHAN
April 23, 2016
Sign in to view read count 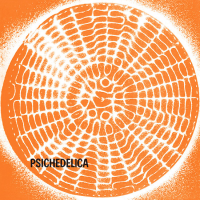 Psichdelica is a fun album. It is music from the pen of Italian movie scorer Piero Umbiliani. The music here composed and recorded for the movie Svenzia Inferno e Paradiso (1968) is in large part a slice of those times. "Trippy, very trippy," might be the colloquial 1968 description for the the disc's first four tunes, with "before their time" electronics, loopy organ work, a soaring vocal chorus sounding like Gregorian chants that include females in the choir, backed by electronic timpani and maybe a short circuiting amplifier, followed by a cool surf guitar groove. It's like 1968 Brian Wilson (of The Beach Boys, 'round about "Good Vibrations" time) at his weirdest, melded with Dick Dale with the Doors' Ray Manzarek.

From there the music shifts into a surprisingly modern-sounding, rock-inflected organ trio mode for four tunes.

Then things get weird, with a pair of songs that sound like Mel Torme scatting after major dental surgery on "Viva La Sauna Svedese" and "Birra, Vermouth e Gin," the former which morphed later into"Mah-Na Mah-Na/The Muppet Show's Song," an unlikely cult hit if ever there was one, and probably Umiliani's most famous tune.

It's on some beautiful orchestral work on "Notte Di Mezza Estate," then an organ trio with added vibes on "Folk Song,"and a loping-across-the-prairie organ trio "Cowboy Song."

Not at all you garden variety recording—music that is strange, trippy and a kick to listen to. 1968: it was a very good year.