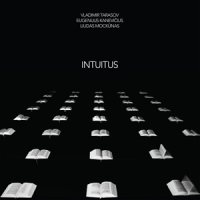 Born in 1946, drummer Vladimir Tarasov long ago assured his place in the history of jazz and improvised music through his membership—from 1971 to 1986—of the Ganelin Trio, one of the first groups from the USSR to become renowned and achieve critical acclaim outside of their homeland. Since 1968, Tarasov has been a resident of Vilnius, Lithuania, also the home of No Business Records. He is something of a polymath, having performed with symphony orchestras, written music for film and theatre as well as directing plays. Since 1991, he has been working in the visual arts; the cover of this album is a photo of his 2003 installation, "Shekina."

In amongst all of those activities, Tarasov has still found time for music, as illustrated by Intuitus, a two-disc vinyl-only album consisting of eight tracks, which was recorded at Tarasov's home studio in June 2014 and runs for a very respectable eighty-six minutes. On it, Tarasov is joined by two younger players, Eugenijus Kanevičius on bass plus electronics and Liudas Mockūnas on reeds. The album features seven compositions, all jointly credited to the trio members.

One composition, "Celebrating Life," is featured on the album in two different versions, which throws light on the trio's modus operandi. At nearly six minutes, the first version is over twice the length of the second, and the two are not obviously versions of the same piece, the first opening with a distinctive bass clarinet riff that never appears in the second. Rather, the trio seem to use the composition as a springboard for improvisation, with the two versions going in very different directions—both good, but different.

Throughout, Mockūnas reveals himself to be a versatile and imaginative improviser, with a well-developed sense of melody, whether on soprano or tenor sax, clarinet or bass clarinet. He is in the spotlight more than either of his bandmates, whose occasional solo breaks bring variety to the album. Across the whole album, the three create the overwhelming impression that they know each other's playing well and understand the best ways to complement one another. No-one ever solos for too long and there are no awkward "what next?" moments—Tarasov's brushwork always being on hand to gently but firmly propel things along.

As the debut album by this trio, Intuitus must be judged a success, and lead to hopes that more will follow from them soon.