By Mark Sullivan
December 3, 2015
Sign in to view read count 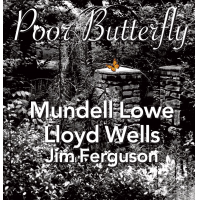 Mainstream jazz guitar doesn't get much better than this. Guitarist Mundell Lowe's long career includes sideman stints with Billie Holiday, Carmen McRae, Andre Previn, and many others; he has composed film and TV scores as well. Co-guitarist Lloyd Wells also grew up in Laurel, Mississippi, giving the pair a hometown connection. The two previously collaborated on This One's For Charlie (Azica Records, 2000).

It's a well balanced program, comprised of three guitar duets, three solo features from both of the guitarists, and three trios with bassist Jim Ferguson. The program opens with the only jazz standard not from the Great American Songbook: Gerry Mulligan's "Line For Lyons," an up-tempo romp for the trio, with the guitars engaging in an energetic, contrapuntal chase. Things slow down after that—if there's one weakness in the album, it's the abundance of ballads, making it very low key. But the duo version of the title tune is lovely, and the pattern for most of the CD is set when it is followed by two solos.

Lowe and Wells are both such accomplished chord-melody players that there is less contrast between the solos and duets than might be expected. The solos sound full, lacking only the swing rhythm playing provided by the second player. The only original on the set list is Wells' "Uncle John," a folksy tribute to a beloved elderly relative. Ferguson sings it in a light high voice reminiscent of the vocal style of trumpeter Chet Baker. It's a nice contrast to end the disc, and exemplifies the warm, friendly atmosphere of the music making.