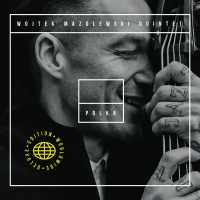 Jazz in Poland has a courageous and artistically distinguished history—first in cultural opposition to Soviet-era dictatorship, later as a celebration of national and personal freedoms. Despite this, most Polish musicians remain little known beyond their own borders. The violinist Michal Urbaniak and the late pianist Krzysztof Komeda and trumpeter Tomasz Stanko are among a tiny handful who have acquired bigtime international profiles. On the strength of Polka (Worldwide Deluxe Edition), bassist, composer and bandleader Wojtek Mazolewski deserves to join their number. The album is a total stonking blinder and it almost certainly deserves five stars rather than the four and a half which caution dictates.

As the subtitle suggests, this is not Polka's first release. It originally came out on Agora in 2014, with a slightly abbreviated version following on Mystic Production in 2015. Feted in Poland, the album stayed under the radar practically everywhere else. The Worldwide Deluxe Edition is an attempt to correct that. The disc comprises most of the material from the Agora edition, remastered, with four bonus tracks—the three "London" titles and "Theme De Yoyo"—that were recorded two years later and released as an EP on Lanquidity in 2017.

The 2014 tracks are stunningly beautiful, the 2017 ones utterly sublime. From the melodicism of "Paris" and "Bangkok," through the throbbing, techno-referenced "Berlin," and on to the dirty rocking funk/free improv collision of the "London" suite and the James Brown's horn section-meets-Albert Ayler and Donald Ayler "Theme De Yoyo," Polka (Worldwide Deluxe Edition) is pure pleasure. And not to forget "Sunday" either, a masterclass in how build drama and tension with just five musicians and no discernible overdubs.

Great tunes, infectious beats and rhythms, concise solos—around half the playing time is through-composed—striking ostinatos, lots of call and response and counterpoint in the arrangements, an atmosphere of passion and joie de vivre, and respect for tradition combined with a future-facing vibe. What more could you ask for? An outstanding band? You have one. Pianist Joanna Duda is a singular soloist, and that is not to belittle the on-point contributions of her colleagues Oskar Stenmark on trumpet and Marek Pospieszalski on tenor saxophone. Duda also composed two tunes, "Grochów" and "Kraków." Apart from the collectively composed "Berlin," all the other tunes were written by Mazolewski, except "Theme De Yoyo," which was composed by the Art Ensemble Of Chicago. There is not a dud moment during the entire 52 minute playing time.

That rare thing, Polka (Worldwide Deluxe Edition) is an album that genuinely merits the much overused description "masterpiece."