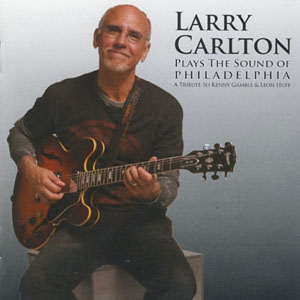 Regardless of context, guitarist Larry Carlton has built a reputation as one of the tastiest guitarists around, whether he's supporting singer/songwriter Joni Mitchell, jazz/pop hybrid Steely Dan or soulful jazz/funksters The Crusaders. His own records, while always accessible—at times, crossing the line into smooth jazz territory—demonstrate a distinctive blend of sweet and gritty tone, bluesy soulfulness, and plenty of jazz chops, often surfacing in the most unexpected places. Live in Tokyo With Special Guest Robben Ford (335 Records, 2009), was harder-hitting than usual, suggesting that though Carlton (and Ford) chooses easier-on-the-ears contexts, he never sacrifices the core qualities that make him worth scoping out.

Plays the Sound of Philadelphia is Carlton's homage to the songwriting team of Kenny Gamble and Leon Huff, who were responsible for a seemingly endless string of soul/R&B hits in the 1960s and '70s. The songwriting/production duo, responsible for massive hits by artists including The O'Jays ("Backstabber"), Jerry Butler ("Only the Strong Survive"), Harold Melvin & The Blue Notes ("If You Don't Know Me By Now") and Joe Simon ("Drownin' in the Sea of Love"), built a sound that, ultimately, became directly associated with the town they called home.

Rather than taking these iconic songs and stretching them out for extended soloing, Carlton keeps them short—radio-friendly, and single-length, just as they were back in the day. A couple of background vocalists deliver familiar choruses throughout as a backdrop for Carlton's ever-perfect tonal and melodic choices, and Bill Labounty sings lead on a couple tunes, including the bright "Drowning in the Sea of Love" and anthemic "Only the Strong Survive," these reverent arrangements never stretching far from their original sources. Six horns drives a five-piece rhythm section that includes, along with pianist/arranger Tony DeSare, Late Show with David Letterman stalwart, Paul Shaffer, on organ.

But, at the end of the day, with a collection of songs near-Jungian in their familiarity, and terrific charts from DeSare and trumpeter Steve Guttman, it's Carlton's visceral tone and ability to get to the heart of each song in an unfailingly personal way that make this 11-song set, at just under forty minutes, a thoroughly appealing look back, for those who miss the days when The Sound of Philadelphia ruled the airwaves. All the while, Carlton's broader harmonic knowledge bolsters his chordal work on "Could It Be I'm Falling in Love"—his warm, clean tone and octave-style playing clearly referencing Wes Montgomery—while at the end of the more up-tempo "Back Stabber," Carlton combines bluesy bends with the barest hint of bebop sensibility.

And that's the beauty of Plays The Sound of Philadelphia, which also comes with a bonus "Making of" DVD. As much as this fits more in the adult contemporary category than jazz, Carlton peppers the session with plenty of markers that make clear his jazz roots remain an undercurrent beneath everything to which he sets his mind. It may not be edgy or forward-thinking, but it grooves to its sources with plenty of booty-shaking soul, all the while providing the ever-tasteful Carlton with plenty of room to deliver. And deliver he does, from start to finish.

CD: Could It Be Like Falling In Love; Back Stabbers; If You Don't Know Me By Now; Drownin' in the Sea of Love; I'll Be Around; You Make Me Feel Brand New; Bad Luck; Never Give You Up; Mama Can't Buy You Love; Only the Strong Survive; Might Love. DVD: The Making of The Sound of Philadelphia feature.