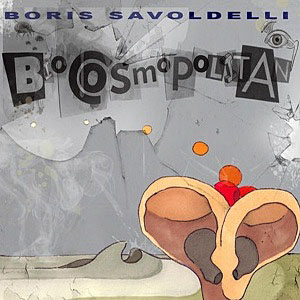 What a contrast Boris Savoldelli's Biocosmopolitan is to the vocalist's predecessor, Protoplasmic (MoonJune Records, 2009), which featured guitarist Elliot Sharp as his chief collaborator. While Protoplasmic was a brave dive into the experimental, Biocosmopolitan is a bright, infectious and singable work. The right balance of passion, delivery, and technology come together for 16 enjoyable tracks with brevity a main device, employed by Savoldelli, that helps maintain a constant sense of movement and flow.

The style is a sort of "modern sentimental." The lyrics bounce between English and Italian, and the basic mood is an upbeat one. Other than Savoldelli's vocals, vocal effects and piano, electric bassist Jimmy Haslip performs on the title track, while trumpeter/flugelhornist Paolo Fresu appears on "Concrete Clima" and "Kerouac In New York City." It is Savoldelli's multilayered vocals, though, that make him sound like an urban choral orchestra.

There is an absolute sense of humor flowing through the majority of the songs. Whether it be the sound effects of rain, the clapping hands of a crowd, or a scratchy LP record effect on a turntable accompanying the vocals, there is never a dull moment. The CD's only gray mood might be found in Savoldelli's English and Italian versions of "Biocosmo," which suggest some affection for the music of Radiohead. Jimi Hendrix's "Crosstown Traffic" is a welcome bonus track that grooves, surprisingly, without any guitar.

Move over Bobby McFerrin, Take 6, and Norah Jones; with Biocosmopolitan, Boris Savoldelli has moved to the front of the line.