BY BUDD KOPMAN
September 25, 2007
Sign in to view read count 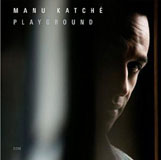 Part of what makes jazz so fascinating is its stylistic breadth. Indeed, the word jazz is almost synonymous with "that-which-shall-not-be-defined," but labels are a shorthand that can help relate a given release's main characteristics. Playground, drummer Manu Katché's second release as a leader after Neighbourhood (ECM, 2005), resists the application of a label, but "ECM Smooth Jazz" might suffice.

Even before the screams subside, that label does need explanation. Smooth Jazz, which is a very popular genre, is usually defined as jazz with any sharp edges sanded and its harmonies, rhythms, melodies, improvisations and dynamics existing within a small range. The problem is that many people find it engrossing, while others, moved by what "real" jazz has to offer, call it "sonic wallpaper" or, even worse, "elevator music." Recall that Benny Goodman was accused of smoothing out the rhythms of black jazz to make it popular for the white audience.

Prepending ECM to the label is meant to imply an added sophistication or complication to music that remains limited in its range. This much is true, and the spice is supposed to relieve the ennui induced by lack of contrast, and raise the music from being merely euphonious to become engaging.

The audience for non-smooth jazz is quite small overall, and that for unapologetically challenging jazz is miniscule. In attempting to live in both worlds, positive spin on Playground would note its varied grooves, accessible melodies and the interplay of the musicians. Certainly, one can hear the many ways that Katché varies the basic groove of any given track. An accessible melody to one person might mean a simplistic melody to another, so how can any music be critically investigated? Is "good for what it is" a valid critical stance?

The term subtle could very well be used in positively describing this music: Katché is subtle in his rhythmic variations, pianist Marcin Wasilewski is subtle in how he colors the simple harmonies, and bassist Slawomir Kurkiewicz is subtle in how he varies the eleven tracks' characteristic vamps. Saxophonist Trygve Seim and trumpeter Mathias Eick subtly play against each other and Wasilewski.

However, this kind of subtlety has been layered upon a base of extreme simplicity and is worlds away from the kind of subtlety of say, Tord Gustavsen (Being There (ECM, 2007)) or Nik Bärtsch (Stoa (ECM, 2006)), to name two quite different musicians.

Gustavsen consciously strips away everything extraneous, leaving the subtle, while Bärtsch's music arises from the subtle interactions of rhythmic patterns and their repetition. The core of both men's music, however, consists of much deep thought that creates many levels within what is crystalline music.

If you are looking for somewhat sophisticated groove, then Playground fits the bill. However, if you need more of the mind to go along with the body, then you might want to look elsewhere.