By Mike Jurkovic
October 27, 2022
Sign in to view read count 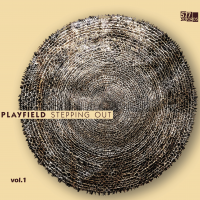 577 Records founder, chief architect, free blowing, free willed, harmonic rebel and reed master Daniel Carter has never shied away from the unknown metropolis. From the silent instant which captures the imagination and sends it sleighing its own peaks and valleys, Carter, and whoever chooses to accept his challenge to participate, let the moment move them and the music into new spaces.

Playfield, as this particular congregate of players from downtown NY is dubbed, brings it all to the foreground on Stepping Out. These harsh yet restive urban tone poems push, plunge, and manipulate their own. They abandon the old playbook and choose not to replace it with another set of rules, of coinage, of equilibrium. Vocalist Luisa Muhr's urging exclamations and proclamations serve as the human cry and chatter of myth encountered on any street while venturing the shadows of New York City—especially a city slowly opening up to itself and the world after a plague tried to kill it.

Recording for the first time in a studio in Brooklyn (Carter prefers the sounds of the city to be included in his music, so he records outdoors) Playfield set about creating a sonic cityscape which is never easy to define because it is always in the act of transpiring, looping around itself, subject to the next sound of piston and gear, gunshot and siren. So pianist Eric Plaks, bassist Zachary Swanson, drummer Jon Panikkar, fellow sax man Ayumi Ishito, willfully conspire with Carter and guitarists Aron Namenwirth and Yutaka Takahashi to create a sound and a moment in sound that no other city in the world can claim. It is crystalline and muddy, spiritual and secular. It is human and therefore beautiful.