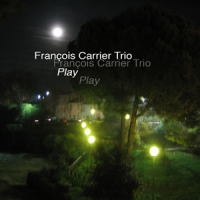 It may not come as a complete surprise to listeners who have been following Canadian saxophonist François Carrier's work, but his new trio record has a very odd sense of coherence. It's odd for two reasons: one, because Play was compiled from a total of seven different appearances during the trio's 2000 Canadian tour, at locations from British Columbia to Nova Scotia; two, because most of the recording (six of eight tracks) consists of fully improvised music. Somehow all those stops on the road hang together quite nicely when the deed is done.

This is the first time Carrier's trio with bassist Pierre Coté and drummer Michel Lambert has made a record without guests, and the unpredictable dynamics of their interaction reward close attention from start to finish. They've spent enough quality time together to develop the kind of intuitive connections that are required to make spontaneous music like this work, and it shows.

Play is considerably more abstract than All' Alba , which was recorded in 2001 in the studio with pianist Uri Caine. "Le Marais" reflects the way the group explores color and melody, progressing through phases of cascading notes, sporadic interplay, animal-like noises (that's Coté's bow), edgy lyricism, up-tempo swing, and a polyrhythmic riff-driven jam, ending softly and unexpectedly on a gentle note.

Lambert plays very assertively, sparking developments at several phases during the group's musical evolution. He's often responsible for keeping an uneasy balance between inside (swing/regular meter) and outside (color/accent) playing, usually preferring the latter, respecting time but almost never steaming forward without some friction along the way.

Both of the actual Carrier compositions (recorded at the United Anglican Church in Invermere, BC) start out lyrically, and they're not a challenge to spot among the improv material. Ironically, though, one of the fiercest climaxes comes with one such piece, "La Danse de Grand-Mie"—controlled intensity, not bleating animalistic fury, but unmistakable nonetheless.

The interaction among these three players reveals literacy with the post bop and free music continua, but it's not the sort of free-quoting postmodern multilateralism that characterizes the Dutch or downtown New York schools, for example. Play is more about listening and responding, developing ideas together and then not hesitating to move on when the right time comes. Not an easy feat, but these involved improvisations (most average ten minutes) pull it off with intelligence and style.