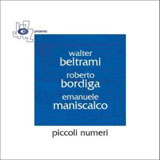 Despite a long career and lengthy discography, it's always been curious that John Abercrombie has been a less influential guitarist than peers like Pat Metheny, John Scofield and Bill Frisell. With an instantly recognizable approach as fluid and adaptable as that of any guitarist alive today, it might seem that Abercrombie's impact has been more felt than heard. Walter Beltrami is a rare occurrence—a guitarist who, if any single artist can be cited as a stylistic reference, is undeniably linked to Abercrombie. That said, Piccoli Numeri possesses more than enough personality to make Beltrami's roots in Abercrombie just that: roots that are influential rather than directly imitated.

Beltrami possesses a similar innate lyricism, warm tone and sophisticated sense of harmony, and a comparable penchant for quiet introspection. Much of Piccoli Numeri is gentle and down-tempo, with an attention to space and clarity not unlike the transparency of Abercrombie's label for over thirty years, ECM. Still, like Abercrombie, Beltrami can heat things up as he does on "Verbal Realities, adopting a distorted tone and more aggressive stance supported by bassist Roberto Bordiga and drummer Emanuele Maniscalco, who are as elastic and dynamic as Marc Johnson and Joey Baron in Abercrombie's current group on the superb The Third Quartet (ECM, 2007).

"The Letter, one of ten Beltrami originals (the eleventh tune, "Table Lamp, is a collective improvisation), begins as a melancholy rubato piece for the trio; but the guitarist then goes it alone, using looping to create a guitar chamber orchestra, with an underlying pattern of accompaniment that acts as a foundation for multiple melodies masterfully and seamlessly looped. Harkening back, aesthetically, to Abercrombie's Characters (ECM, 1978), it's a tour-de-force of invention that pushes the concept of studio overdubbing into the present by being created in real time.

Despite the pensive and often rubato nature of the disc—or with time so elastic that it feels that way—there's plenty of variety. There's no dearth of harmonic movement, with one of Piccoli Numeri's defining characteristics being Beltrami's sense of melody; so unique as to be both unpredictable and eminently singable. The trio moves as a single voice throughout, waxing and waning dynamically with the kind of freedom that might be abstruse, if it weren't for the strong focus and thematic content of Beltrami's writing and the trio's strong chemistry.

It's the kind of simpatico playing that only comes from working together regularly. Piccoli Numeri may be a new discovery—through its international availability on the Italian Cam Jazz label—but this trio has been together since 2003, with one other disc to its credit. Still, for all intents and purposes, Piccoli Numeri is Beltrami's debut on a larger scale and, in its compelling mix of elegant freedom, rich composition and group interaction, is one that augurs very well for a guitarist and trio well worth watching.