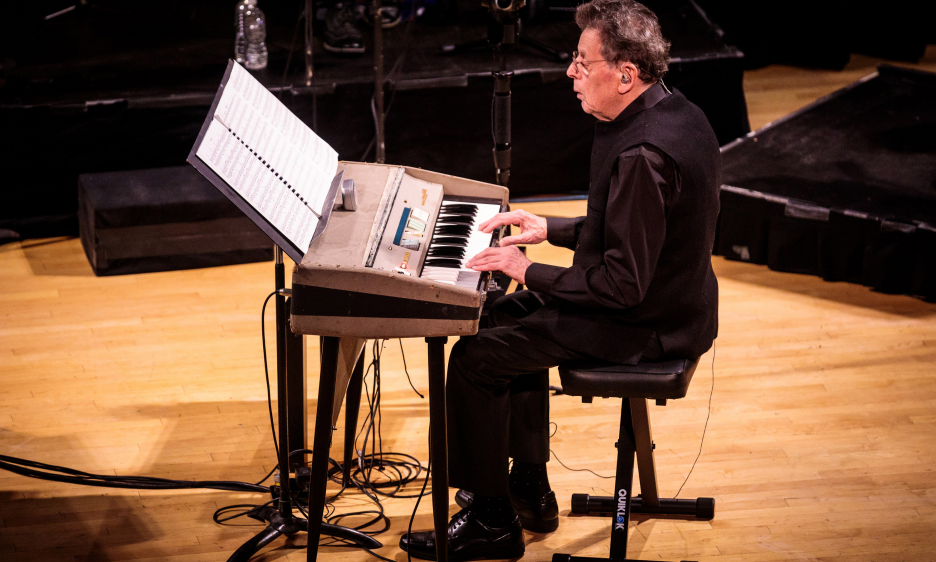 Philip Glass's monumental Music in Twelve Parts was originally intended to be performed over three nights. "It's a marathon," Lisa Bielawa, the Ensemble's singer, has said. "The way people train for a marathon is the way we prepare for this piece."

Returning to New York's Town Hall where it debuted in 1974, the four-hour cycle was performed in a single evening on Saturday, October 27, requiring a certain amount of stamina on the part of the audience. The twelve parts were broken into four three-part sets, each lasting 45 minutes. A 75-minute dinner break followed the performance of "Parts 4, 5 and 6," and the entire evening ran from six pm until nearly eleven.

As with so much of the music Philip Glass composed in the 1970's, Music in Twelve Parts can be hypnotic, mesmerizing, haunting and energizing all at once. Repetitive keyboard patterns laid down a bed of sonic purity that the vocalist and other instruments slipped in and out of, gliding in luminous, silken musical meditation. A wholeness, or holiness, was palpable in Glass's work from this period that can leave the listener breathless, in awe and begging for more.

There was, of course, a certain irony to such an extended piece of music from a composer known for minimalism, but Glass called Music in Twelve Parts the end of his minimalism, preferring to describe it in terms of repetitive structures. Music in Twelve Parts was influenced by his time in India, with patterns that change slightly from one cycle to the next but evolve to a much larger degree over the full piece.

Originally conceived as an "open score" that could be played by different combinations of musicians, the instrumentation has become firm, with three winds (flutes and saxophones), three keyboards and vocals. Soprano Lisa Bielawa has performed with the Philip Glass Ensemble since 1992. Joining her were keyboardist and music director Michael Riesman, keyboardist Mick Rossi and Jonathan Gibson, Peter Hess and Andrew Sterman on woodwinds. For this special performance at Town Hall, Glass played the same Farfisa organ he used on stage for the work's premier in 1974.

Philip Glass has had a remarkable career, influencing classical and jazz musicians as well as popular artists such as David Bowie and Brian Eno. His performance of Music in Twelve Parts, presented by Town Hall and produced by Pomegranate Arts, also showed that he remains, at age 81, an energetic performer.