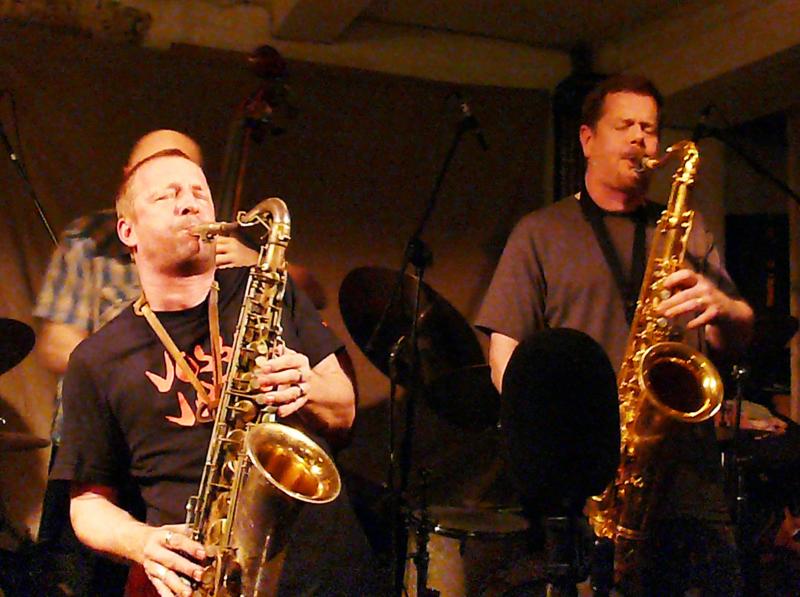 Reprising a legendary three-day residency at Dalston's Café Oto in April 2011, saxophonist Peter Brötzmann's Chicago Tentet roared into town for two nights as part of the London Jazz Festival, the penultimate dates in a nine-day European tour. Incredibly, given the inclement economic climate and the busy schedules of a star-studded roster bursting with leaders in their own right, this band has hit the road relentlessly, several times each year, since its inception in 1997. That depth of shared experience, alongside the possibility absorbing lessons learned over a prolonged period has made the Tentet one of the preeminent large ensembles in free jazz and beyond.

What that means is that, even though 11 strong, the group displays the same fluidity, fleetness of foot, capacity for instant composition and preternatural ability to seamlessly shift between radically different moods, as a much smaller group. Add to that the instrumental prowess and improvisational nous of the individuals and you have a package made in heaven, and one difficult to pass by if they are in the neighborhood. The Café Oto crowd certainly thought so. With the additional publicity which comes from being part of a high-profile event, it was no surprise that both nights were sold out well before the weekend.

Unlike previous performances, which featured subsets of the whole, the full Tentet + 1 took to the bandstand both nights, creating nonstop spontaneous combustion in four 50- minute sets. For those not present, the double CD Walk, Love, Sleep (Smalltown Superjazzz, 2012), recorded during the Spring 2011 tour gives the best indication of the group's current state.

As the musicians crammed into the small Oto stage area, the front row of the audience was at risk of being prodded by trombone slides, although by the second night a little rationalization had permitted a more expansive performance space and left the band a little less hemmed in. At times, as faces lit golden by the perfunctory Oto spotlight loomed from out of the gloom, the spectacle evoked a Rembrandt painting, perhaps a hipper version of the Night Watch.

An air of quiet intensity and focus hovered about the band before the Friday concert, perhaps the result of a long journey from the previous gig in Lithuania, and it translated into one of the more reflective performances by the 11-piece collaborative venture. Several unaccompanied solos materialized during the first set, Ken Vandermark's intense overblown tenor saxophone, garlanded with split tones, being just the start. Matters proceeded by way of ad hoc permutations of instruments coming together, to which others joined to comment, aver, or dispute until they eventually engulfed the starting gambit. Such alchemy demanded supreme listening skills and trust to not only avoid concocting a mess, but to conjure something coherent which, like Scheherazade, told a bewitching catalogue of separate but interwoven stories.

It was notable just how well the transitions were managed. As soon as one person or subset finished, another was ready to pick up the baton, either maintaining the momentum or switching the trajectory to somewhere completely unpredictable. In one striking passage, trombonist Jeb Bishop pontificated a small hours feel in tandem with bassist Kent Kessler's purposeful pizzicato and drummer Paal Nilssen-Love's tonal cadences, while Joe McPhee's clarinet and Vandermark's tenor added mellow counterpoint. Brötzmann put his alto saxophone to his lips but then thought better of it, until the interlude came to a natural conclusion, at which point he took over with vigor emitting a paint-stripping shriek, ably abetted by Fred Lonberg-Holm's electronics and cello. At just the right moment, Nilssen-Love tumbled in once more (drawing an approving glance from saxophonist Mats Gustafsson) to reunite what has become known as the Ada Trio (following their inaugural appearance at Café Ada in the German's hometown of Wuppertal) for one of the evening's highlight.

As always, Brötzmann led by example. In one magnificent passage he layered his vibrato-laden alto saxophone ululations over Gustafsson's majestic baritone elegy to scalp-pricking effect, while the first set ended with another coruscating Brötzmann tenor solo which built to a climax and then sidestepped the expected blowout by gently subsiding to silence.

But everyone had ample opportunity for expression. Trombonist Johannes Bauer's finest juncture came in a garrulous solo which left him red-faced with effort, where he muttered and chuntered, his voice and instrument blending in delightful symbiosis. The trombonist even continued with the vocal noises when he playfully took the mouthpiece away from his mouth. On cello, Lonberg-Holm veered back and forth across the divide between accompaniment and adventure, plucking with the bow threaded through the strings to produce a sound like a thumb piano, as well as using his massed electronics to manipulate and repeat a cello line, manufacturing a careering backdrop.

For its Saturday night performance, the group seemed even more energized. Vandermark, center stage—and sonically as well as physically prominent—set the tone with a tenor outpouring ending with the rumbustious encouragement of the entire assemblage in a cathartic exhibition. But he also showed himself willing to subsume his ego to the greater good, often providing the glue to hold collectives together with his repeated motifs on baritone or tenor forging an abstracted R&B thread.

Like an ice sheet calving icebergs, the Tentet has spawned many smaller groupings. One of the most distinguished, the reed trio Sonore, surfaced at one point as the twin baritones of Gustafsson and Vandermark flanked the leader's bristling tenor, with the Chicagoan again filling the anchor role, and Per Ake Holmlander's supple tuba harrumphing support.

When all eleven were in full spate, fueled by the powerhouse percussion pairing of Michael Zerang and Nilssen-Love, they generated one of the most exciting hard-driving sounds around. It resulted in a glorious anthemic ending to its first set, with Brötzmann's alto soaring over a horn chorale. Of course, there were more poetic moments too: almost as a prologue to the second set, McPhee and Vandermark conjoined in delicate clarinet colloquy, accompanied by Lonberg-Holm's cello on its best behavior, to fashion a trio worthy of the most refined chamber. And later, McPhee's pocket trumpet answered Brötzmann's clarion burst and a lyrical duet ensued, made all the more poignant by the contrast with which the mayhem framed it.

A short encore followed the rapturous applause to round out two exceptional evenings of music.

Subsequent news from the last gig of the tour in Strasbourg was that this was to be the Tentet's last-ever appearance. In retrospect, some clues where perhaps discernible: a general weariness of demeanor (which nonetheless fell away once the group took to the stand), and an incident of dissatisfaction when, in the last set, Brötzmann growled an imprecation at Bishop to stop after the trombonist crossed the imperceptible boundary between having his say and allowing someone else theirs. If Brötzmann has finally called time on the band, then the only thing left to say is: thanks for 15 fantastic years.