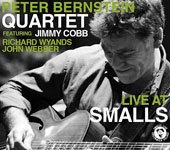 Peter Bernstein is one of the most pleasing and accomplished guitarists around, a must-hear, go-see for fans of straight-ahead jazz with a fresh, of-the-moment feel. A fixture on the New York scene and beyond, Bernstein deserves to be even better-known for his intricately beautiful melodic lines, harmonic sophistication, spot-on improvisation and good taste.

Mentored early on by Jim Hall, Bernstein's never been a screamer. He plays quietly and intensely, with confidence, intelligence, elegance and rare sensitivity—all amply displayed on Live at Smalls, part of a new series taken from the Greenwich Village jazz club.

Listen to the gorgeous guitar lines in "Stairway to the Stars," "Delilah" as well as in Bernstein's own lively and likeable originals "Vida Blue" and "Sideberns." And his band mates have everything it takes to provide terrific support for these and other works, including Gershwin's "Love Walked In." Like Bernstein, these pros make everything seem effortless. Veteran drummer Jimmy Cobb has the right touch for each moment, whether soloing or propelling the group forward, handling laidback or flashy with equal prowess. Richard Wyands is a standout on piano, playing cleanly and smartly throughout, sweetly executing Miles Davis' "Four" as well as other pieces with a winning lyricism and chord choices. Smalls and Smoke regular John Webber is able on bass.

The overall quality of this CD, recorded live over two nights in December 2008—with some audience responses intact—is excellent and true to the club's intimate and easy-going spirit. One only wishes the "night" would never end. As for this talented but still somewhat-underexposed guitarist, here's the bottom line: There are people who play guitar and then there are artists like Bernstein.