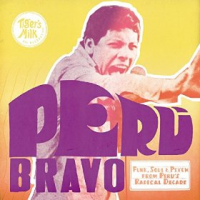 The fifteen tracks on Peru Bravo: Funk, Soul & Psych from Peru's Radical Decade reflect the refractive impact of the global social upheaval of the 1960s and early '70s—including and especially the wild and wooly rock and psychedelic music of the era—on the popular music of Peru, with each track remastered and restored from original tape reels licensed from the original Peruvian labels. (This is the second such compilation of Peru's music from Tiger's Milk Records, following Peru Maravilloso: Vintage Latin, Tropical and Cumbia).

As you'd expect, Peru Bravo presents a multicolored, kaleidoscopic journey full of mileposts familiar and obscure. Several tracks revisit rock and funk tunes popular in the US: Jeriko picks up the blues "Hey Joe" (popular from the famous Jimi Hendrix version of the time) and dresses it in Jose Feleciano threads, his strumming guitar barely able to keep pace with his impassioned vocal. Los Texao's take on "Sookie Sookie" (popularized by Steppenwolf) unleashes the pure Dionysian frenzy of rock 'n' roll, with a frantic vocal that barely touches down on the music and psychedelic guitar and organ chords singing in raggedly perfect harmony. Peru Bravo programs them back to back, and back in their day, "Hey Joe" and "Sookie Sookie" would have comprised a killer two-sided single.

But not every cover works out so well: Everybody in Los Holys gets the rhythmic point of The Meters' classic "Cissy Strut" except for the drummer—who, unfortunately, plays the most important part. It can sound so simple but that slippery Crescent City second line rhythm is hard to...uh, beat.

The rest of the original music is more original than less, although certainly inspired by musical happenings in the rest of the world. The horns in "Everything's Gonna Change" by Jean Paul "El Troglodita" harmonize with the guitar hook, swing alongside the lead vocal, and suggest in other ways "Saturday in the Park" from the early days of Chicago, when they were worth listening to. The San Francisco sound, an essential pillar of the psychedelic music community, comes through Los Destellos' "Onsta la Yerbita," a washed-out electric blues that suggests the Jefferson Airplane flying over Peru; and "La Camita" by Traffic Sound, which more predictably sounds like Latin rock-jazz pioneers Santana.

Peru Bravo opens with the powerful yet charming "Bahia" by Laghonia, which leaps off from the same fevered psychedelic guitar peak where the Shocking Blue wrote their hormonal hymn to the goddess on the mountaintop "Venus," and compels you to, "Move all your body, don't stand like a rock/ Bahia is all that you need—hey hey!"