BY GREG CAMPHIRE
October 20, 2007
Sign in to view read count 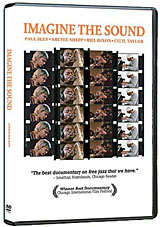 The state of jazz in America in 1981 has remained a sort of lost history, in no small part due to the resounding indifference met by a brilliant film of the same year: Imagine the Sound. Now, with the Ron Mann-directed documentary reissued on DVD for the first time, this overshadowed period can reenter the spotlight to educate, enlighten and entertain those who either missed it the first time around or who weren't around to experience it first-hand.

Visually remastered and sonically remixed for the digital age, Imagine the Sound is a stunning examination of four innovative, influential figures who began their careers in the 1960s and continue to be active well into the 21st century: pianists Cecil Taylor and Paul Bley; saxophonist Archie Shepp; and trumpeter Bill Dixon. Intertwining striking performance footage and insightful interviews, the film not only tackles weighty issues concerning jazz history, artistic aesthetics, economic struggles and race factors, but offers an exciting look at these musicians in the midst of their creative processes.

The charismatic Cecil Taylor nearly steals the show, between his athletic solo piano technique, abstract poetry recitals, interpretative dancing, stream-of-consciousness monologues and debonair fashion sense. In performance, Taylor fully displays the characteristics that have defined him: percussively hammering the keyboard as "88 tuned drums, dropping bombs in the form of dissonant tone clusters, using ten fingers to imitate a dancer's leaps in space, and exhibiting a full range of dynamics that includes a delicate lyrical touch.

It's fascinating to compare and contrast the solo recitals of Taylor and Bley, each of whom has a highly personal approach. While Taylor's dense flurries of notes require a muscularly agile attack, Bley makes an introverted use of space, letting overtones of single chords ring out while playing the strings and hammers inside the instrument. The pair's differing styles are visually complimented as well: Taylor is shot against a bright, pure white background with refracting camera angles, while Bley is captured in the dim light and shadows of a darkened studio. But for all their divergent abstractions, the blues remains an integral element for the two. Bley periodically inserts fragmented yet soulful snippets of blues phrases into his improvisations, and Taylor simply sets fire to the keys as if he had sold his soul at some midnight Delta crossroads.

The blues is a powerful thread in the film, running through the music of Archie Shepp as well, and the saxophonist's articulate delivery, both in performance and conversation, speaks volumes. Two electrifying compositions are depicted featuring Shepp and his quartet in the studio. These searing workouts, where you can almost feel the beads of sweat sliding down Shepp's expressive face, include the bebop-influenced "U-Jaama and the loping Afro-Latin rhythm of the spoken-word diatribe "Mama Rose. Drummer John Betch is a revelation here, dancing all over the traps with a smooth elegance that belies his explosive licks and deep mastery of the compositional forms.

Bill Dixon's all-star trio is equally compelling, employing blistering swing, shifting meters and ethereal, rubato ballads. Wonderful bassist Art Davis maintains a Zen-like calm, even at the most demanding tempos; and drummer Freddie Waits, who effortlessly switches from sticks to brushes to bare hands, blends a profound harmonic sensibility into the ensemble with his perfectly-tuned kit.

Dixon also has plenty to say when the trumpet is out of his mouth, and his forcefully opinionated style is captivating. Holding forth in sunglasses and black leather top hat, Dixon makes pointed commentary on the lack of opportunities for his unique brand of music. Claiming that race is a factor in denying him and other black artists the opportunities to perform, he shrewdly states, "I don't know if that's my paranoia, but it's been my experience.

The ultimate irony, as Shepp points out in an interview segment, is that the 1981 film was finally being made at a time when the achievements of these musicians' far more influential forebears, innovators like John Coltrane and Charlie Parker, had largely gone unnoticed by the public. Twenty-six years later, Imagine the Sound has finally made it to DVD, hopefully to help fill some of these holes in our collective memory and offer a more complete picture of jazz history.

Imagine the Sound can be purchased exclusively from the filmmakers at Films We Like.