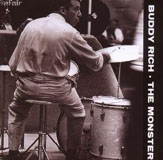 The ambiguity in the title of this one really nails it. Buddy Rich was never a man to let subtlety or restraint get in the way of his ego, and in so doing he reduced the art of jazz drumming to a matter of overbearing machismo and overkill. In short, any beat that Rich played usually stayed played in the way that a murder victim stays dead.

On this collection of sides from the mid-1950s that much is already in evidence. Of the six minutes of "Strike It Rich," the aptness of the title is made only too apparent in the fact that over half of its duration is taken up by the leader thrashing away in a manner that, for all of its undoubted power, makes for tiresome listening. As the likes of Harry "Sweets Edison on trumpet and alto sax man Willie Smith thus miss out in the extended solo stakes, it also amounts to an exercise in frustration.

The title track, recorded in May of 1956, lives up to its title in terms, once again, of how much of its duration is given over to solo drumming. After Ben Webster, amongst others, has given the listener an object lesson in how to solo economically, just under five of its eleven minutes are given over to Rich setting about his hapless kit like a man for whom harboring a grudge seems like second nature.

Rich manages to rein himself in a little on the quintet sides that make up over half of this set, although on "The Yellow Rose of Brooklyn," the flower of the title, presumably a delicate thing, stands no chance of survival in the midst of another drum onslaught. "Willow Weep for Me" is, however, turned into something unassumingly wondrous by a group that includes Edison again and Barney Kessel on guitar, and Rich proves he could do subtlety in a way that makes his lack of restraint elsewhere only more frustrating.

"You're Getting to Be a Habit with Me" is imbued with a similar feel, and only the hardest of hearts couldn't be won over by Edison's theme statement. It's a model of economy that allows the melody to sing and which the leader complements in a manner that could almost be the work of a different drummer by comparison with his previous excesses.

Sweets Opus No. 1; Strike It Rich; Sportin' Life (AKA Sweetie Pie); The Monster; Sunday; The Yellow Rose Of Brooklyn; Willow Weep For Me; Easy Does It; All Sweets; Nice Work If You Can Get; Barney's Bugle; Now's The Time; You're Getting To Be A Habit With Me.