By Ian Patterson
October 21, 2007
Sign in to view read count 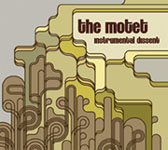 "Afro Disco Beat does what it says. A lovely brass motif leads from the front over Watts' beat and Scott Messersmith's percussion on a song which recalls the Afrobeat of Fela Kuti.

The musical genres visited are many though influences are not overt. There is a hint of 1970s funksters War on "Music is the Weapon, and "Blowback conjures up Taxi-era Bob James. That the 1970s rears its head again at the funky end of "Afrotech suggests that The Motet's main source of inspiration stems from that big-hair, big-trouser decade; but throughout the album 1970s funk slides unobtrusively into bar-friendly techno-beat, with "Anew possessing a pure and soothing chill-out ambience which would fit right in at an Ibizan sunrise gathering.

"Gather your own forces and deal with your own fears and "Invading armies have no rights whatsoever, they have responsibilities are not songs, but the voice-overs from such luminaries as Alice Walker, Noam Chomsky, Damu Smith and Arundhati Roy that color "Instrumental Dissent, and are probably enough to earn the band a Dixie Chicks-style slap on the wrist.

Elsewhere, The Motet does a pretty convincing salsa dura on "La Lucha, complete with sax and guitar solos, while guitarist Ryan Jalbert brings a pastoral, Bill Frisell-influenced feel to the lovely "Old Orchard.

Instrumental Dissent is a groove-based, feel-good album with plenty of good hooks and a few highly infectious numbers, "What Have We Done? being the standout track. Where the music falls down a little, at least in the studio, is that it lacks a little teeth at times, particularly in the soloing, resulting in a polished but, at times, slightly bland end product. Precisely more dissent in the playing would raise The Motet to a whole new level.