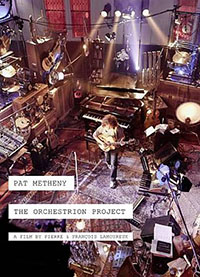 When guitarist Pat Metheny released Orchestrion (Nonesuch) in 2010, it almost immediately became one of his most controversial recordings since Zero Tolerance for Silence (Warner Bros., 1992). Why, in a jazz world, where interaction with other musicians is so fundamental to its spirit, to its raison d'être, would one of the most important guitarists of his generation not only release an album that replaced live musicians with a complex, pneumatic and solenoid-driven beast of an instrument called an Orchestrion, but actually embark on a massive world tour to promote it?

With Metheny, an ever-learning musical sponge, the nutshell answer is: because he could. The more detailed reply would address Metheny's childhood interest in his massively sophisticated, 21st century update of a 19th century instrument-or, rather, collection of instruments, meant to play orchestral music but without the players-and his goal of creating a modern version that would allow him to control the entire seemingly unwieldy beast from one single controller: his guitar. Those who found the concept intrinsically flawed won't necessarily be won over by The Orchestrion Project-a kind-of-live DVD (also available in Blu-Ray and 3D Blu-Ray) that, rather than capturing an actual concert in front of an audience, was another kind of studio recording, but this time expanded to include the entire repertoire taken on the road in 2010, instead of just the five-track, 52-minute original recording. But for those who weren't able to catch a show on the tour, whether or not they are skeptical of the concept or not? Well, they just might find themselves warming considerably to the concept.

That Metheny has responded to critical suggestions that Orchestrion would be a one-album, one-tour phenomenon, never to be heard or seen again, by continuing to bring a smaller, more portable version of the instrument on the road for his 2011 reunion tour with bassist Larry Grenadier and drummer Bill Stewart-as well as on one track of his most recent Unity Band (Nonesuch, 2012) and that album's still-ongoing world tour-only makes sense for any who've followed the guitarist since he first emerged in vibraphonist Gary Burton's groups of the mid-1970s.

Fans know that Metheny's ever-growing instrumental arsenal-ranging from regular hollowbody electric guitars to steel and nylon- string acoustic instruments, baritone guitar, 42-string Pikasso guitar, guitar synths and, now, the Orchestrion-know that he's a meticulous developer of new concepts, and new instruments often weigh heavily in the music he's making at any given moment. But once he's honed the instrument or the concept-for example, with the Grammy Award-winning One Quiet Night (Nonesuch, 2003) and What It's All About (Nonesuch, 2012) , both solo acoustic guitar recordings, but the first focusing exclusively on his relatively new six-string baritone acoustic guitar, and the second a more liberal mix of baritone, regular acoustic, nylon-string and Pikasso-rather than being shelved, it becomes simply one more color on his broadening musical palette.

Amongst some of the more cynical criticisms Orchestrion received upon release and during the tour was that it was a way to cut touring costs by eliminating band member salaries and expenses; nothing could be further from the truth. One look at the full Orchestrion on the DVD cover-with pianos, vibraphones, drums, guitars, basses, glass bottles, cymbals, hand percussion and so much more-and thinking about setup and maintenance on the road makes clear that, while the Orchestrion never gets tired or cranky, it's hardly cheap to tour. Technicians for setup and the inevitable issues of breakage on the road and any other unexpected glitches during performance, plus ensuring there are spare parts for the entire beast makes touring Orchestrion a very large, very complicated and very expensive proposition. When Metheny used the mini-version in the fall of 2011 in a Mannheim performance with Grenadier and Stewart, a sudden failure in the midst of a solo piece was just one example of the kinds of unexpected problems that can arise. That would make it necessary to record multiple nights on the tour, in order to get enough usable live materal-something that would increase touring costs even further.

If all this talk about expense makes it sound like Metheny's Orchestrion is about many things other than the music, it's another thought that couldn't be further from the truth. But in order to ensure the best possible recording-both audio and video-rather than trying to record live concerts, Metheny chose to set up in the church where he spent months developing the Orchestrion show and record it there, without an audience, making it possible to film the instrument-dense stage from every possible angle; to create a system of lighting that would make it even more visually arresting than the actual tour; and be in a position to relatively easily handle problems, if and when they arose.

Metheny has often talked about going into "self-edit mode" when he knows a concert is being recorded (whether intentionally or by audience members who choose to ignore his requests not to, but that's grist for another lengthy discussion), and so the idea of not recording in front of a live audience really has little impact on the end result. Sure, there's the undeniable energy of an audience, but based on the 87-minute film and 21 minutes of bonus tracks, Metheny had no problem ratcheting up the energy levels when necessary, like on the closing song of the main film, "Stranger in Town," taken at an even faster clip than the Pat Metheny version of We Live Here (Nonesuch, 1995). Sure it lacks the interaction that makes PMG such a strong live act-and happy news, fans; it looks like the seven-year hiatus following the ambitious The Way Up (Nonesuch, 2005) and subsequent world tour is nearly over—but working with preprogrammed tracks, and adding other layers in real time from his guitar, with the kind of frightening accuracy that made his Mannheim show so impressive, there's plenty of energy to be heard here as well.

Metheny takes advantage of looping to build songs from the ground up, one track at a time. "Unity Village," from his recording debut as a leader, Bright Size Life (ECM, 1975), but there in the context of a trio, provides an easy slip into the world of the Orchestrion. Metheny begins with his warm-toned, yet attack-driven electric guitar until about three minutes in, when he begins to add a triggered tambourine. Looping the song's chord changes, panned over to the left channel, allows Metheny to solo over his own accompaniment: a relatively simple premise.

From there it's a dive into the Orchestrion suite, and if it seems as though Metheny is simply running down the original recording in sequence-every track roughly the same length with the exception of the very slightly (under a minute) closer, "Spirit of the Air"-what it does provide is the opportunity to see Metheny in action, not just soloing copiously as he does throughout, but demonstrating a rare ability to trigger all kinds of instruments in real time. And that's the real magic of The Orchestrion Project: the chance to actually see, in great detail, how one man and a stage filled with unmanned instruments can create music that soars, sears and, at times, even swings. The title track is, perhaps, the most complex of the bunch, with lengthy unison lines, start/stop action and instruments rolling in and out-but all under Metheny's in-the-moment control.

With the Orchestrion album/suite only occupying half of the live recording, however, there's even more opportunity to witness the real-time potential of the Orchestrion as a musical instrument . The titles of "Improvisation #2" and "Sueño con México," the latter from 1979's New Chatuauqua (ECM), are accidentally flipped, but it's a small enough (and recognizable) error. New Chautauqua was Metheny's first true solo album-a recording where, built with layers of overdubs, the guitarist plays every part, from acoustic guitars to electric guitars to electric bass. For the first time, however, Metheny can actually play the song live, by combining looping, programming and real-time performance. The ten-minute "Improvisation #2" ("#1" is one of four bonus tracks also included) is even more impressive, as Metheny builds a piece from the ground floor. Even more impressive than managing to trigger the various instruments is Metheny's ability to create a number of loops that he brings in and out of the overall mix.

Not since Norwegian artists like saxophonist Hakon Kornstad, whose superb Symphonies Inside My Head (Jazzland, 2011) was a similar example of constructing new compositions in real time, by creating all kinds of loops and then knowing where they have been stored, in order to bring them in and out in varying permutations and combinations, to go beyond the concept of simple looping into the realm of complex, spontaneous compositional construction. But Kornstad was dealing with a couple of saxophones, a clarinets and flutonette; Metheny is dealing with far more variables, making his ability to create in-the- moment compositions of truly orchestral proportions-even using a harmonizer to create modulations within the piece-all the more impressive.

Other highlights include a blown bottle-driven version of "Tell Her You Saw Me," first heard with a real orchestra on Secret Story (Nonesuch, 1992) and here performed with even greater poignancy and lyricism. Metheny's monumental technique has occasionally distanced him from some of the innate melodicism that has built his fan base over the years, but on tracks like this, "Antonia" (also from Secret Story), "Unity Village" and "Sueño con México," it's clear that melody is still an important part of who he is.

The second disc on the DVD edition (the Blu-Ray, with greater storage capacity, is just a single disc) also includes a 15-minute "Making Of" documentary, 20-minute interview with Metheny, the original Electronic Press Kit (EPK) and two opportunities to watch the actual recording process. With 5.1 surround and PCM stereo, the sound is pristine and, when it needs to be, punchy-something the original studio recording of Orchestrion lacked.

As Metheny continues to utilize his mini-Orchestrion in the studio and on the road, those who missed out on the original tour will still have the opportunity to catch him using it in a live context. But it's highly unlikely that he'll take the full-blown model out on tour ever again, making The Orchestrion Project the closest thing to being there for those who missed the tour and an opportunity for those who did to relive it once again. For the naysayers, The Orchestrion Project offers a deeper window into the project, and the chance to either reevaluate or reaffirm their position. Whatever the reason, The Orchestrion Project is further evidence that Metheny's individual projects may vary in their target audience, but like them or not on an individual basis, it's hard to imagine anyone but Metheny successfully launching such an ambitious project and tour, executing it with his signature combination of harmonic, rhythmic and melodic sophistication, and the unfailing Midwestern lyricism that's underscored so much of his now four-decade career.