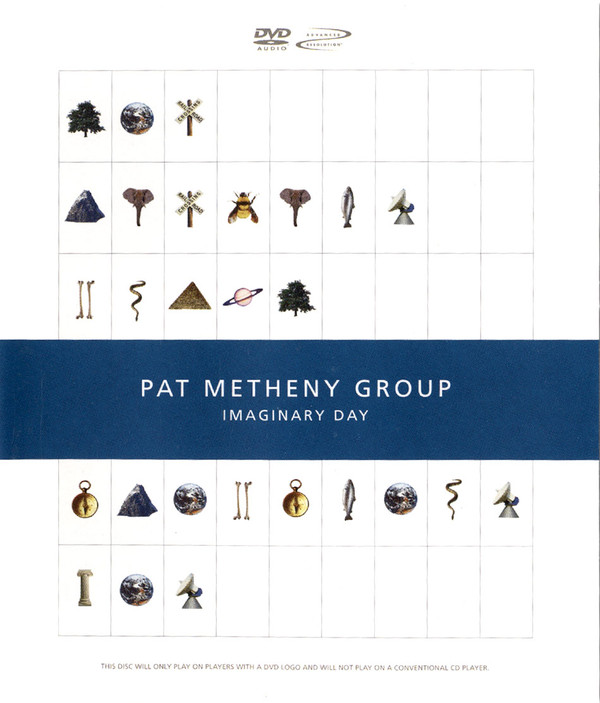 Eagle Eye Media
2001 (reissued 2008) Some artists are revolutionary, others are evolutionary. Some manage to be both, and guitarist Pat Metheny is one of a small group of artists who, always moving forward, occasionally make more striking stylistic leaps. With a string of consistently strong albums that began with Pat Metheny Group (ECM, 1978), Metheny's flagship group has evolved, sometimes in baby steps, other times in larger increments, culminating with the groove-happy We Live Here (1994, reissued Nonesuch, 2006) and stripped down and loosely improvisational Quartet (1996, reissued Nonesuch, 2006). Metheny continues to pursue other interests outside the purview of the group, but invariably brings experiences gained from those other projects back to the group in some form.

We Live Here and Quartet were fine albums, but in no way prepared anyone for what was to follow. From the opening crashes of the title track to Imaginary Day (Warner Bros., 1997), it was clear that Metheny and his longtime compositional partner/keyboardist Lyle Mays had made a major move forward. Accessible as ever, Metheny's arsenal of guitars, including the mind-boggling 42-string Pikasso guitar, his usual array of electric and acoustic guitars, guitar synth and, in particular, the fretless nylon classical guitar of the title track, created the broadest palette the guitarist had used on any single album to date. The more aggressive stance of bassist Steve Rodby and drummer Paul Wertico (who would leave after this album and tour), and the album's more expansive stylistic diversity signaled the beginning of a paradigm shift that would ultimately lead to The Way Up (Nonesuch, 2005), perhaps the group's most magnificent album to date.

As is often the case, material labored on for months in the studio took on a whole other dimension in performance. Metheny Group's Imaginary Day tour, hitting locations around the globe between 1997 and 1998, not only took tracks like the episodic "Imaginary Day," rock steady "Follow Me" and techno metal edge of "The Roots of Coincidence" (the latter featuring Lyle Mays pounding on an electric guitar with rock-like abandon) to greater evocative heights, but delivered the poignant "Across the Sky," complex world beat-informed "The Heat of the Day" and gently grooving "A Story Within the Story" with the kind of subtlety and nuance rare to experience in shows that were the jazz equivalent of rock spectacle.\

Pat Metheny Group shows have, over the years, become more and more orchestrated, largely removing the element of risk that, for many jazz fans, defines the idiom. Still, there's always space for solos and interaction, even if the overall roadmap of the shows has to be planned and executed with military precision, in order (amongst other things) to ensure that Metheny's longtime guitar tech, Carolyn Chrzan, gets the right instrument in his hands at the right moment.

Imaginary Day Live, first released in 2001 but reissued by Eagle Rock in 2008, captures Pat Metheny Group performing nearly all of Imaginary Day, along with a couple of unexpected older tunes—a lyrical solo version of "Message to a Friend," with Metheny on classical guitar and segueing beautifully into the rarely performed gem, "September Fifteenth," from Metheny and Mays' duet record, As Falls Wichita, So Falls Wichita Falls (ECM, 1981), and a fiery version of the group's perennial closer up to that time, "Minuano (Six Eight)," from Still Life (Talking) (1987, reissued Nonesuch 2006).

There are only two criticisms with the DVD. First, at a little over ninety minutes, the DVD doesn't represent anywhere close to an entire concert. Metheny has always given his fans value for money, with shows that usually exceed two-and-a-half hours, and it would have been nice for those who were unable to catch the tour to see an entire show on DVD. Despite Metheny releasing live video documents of every Metheny Group tour since Letter from Home (1989, reissued Nonesuch 2006), the closest thing to a complete performance is Speaking of Now Live (Eagle Vision, 2003), and even that isn't a full show. Still, the primary emphasis here is on Imaginary Day and, collected with other Pat Metheny Group DVD releases, it's possible to get a close approximation of what it's like to see and hear the group in performance.

The other criticism is Rodby's direction and editing. Rodby has, over the past two decades, gradually emerged as not just a fine ensemble player, but an astute producer as well, producing discs by Oregon, including the group's remarkable In Moscow (Intuition, 2000), with the Moscow Tchaikovsky Symphony Orchestra, and Oregon woodwind multi-instrumentalist Paul McCandless' smaller ensemble effort, Premonition (Windham Hill, 1992). Imaginary Day Live was his first attempt at directing and it shows. With the benefit of multiple camera angles, there was the perfect opportunity for a birds-eye view of the group that even the best seat in the house couldn't provide, and which Rodby delivered with The Way Up Live (Eagle Eye, 2006). Unfortunately, armed with digital editing tools and plenty of time, Rodby makes Imaginary Day Live a somewhat tumultuous visual ride, with a variety of visual effects thrown in that, taken individually, can be artful, but when taken together, make the entire experience a little too busy at times.

Still, these are relatively minor quibbles, when compared to the outstanding sound quality and performances on Imaginary Day Live. Virtually every tune outstrips its studio counterpart, through the energy and depth of the solos and the power of the group, which augments the core quartet with the late vocalist/multi-instrumentalist Mark Ledford, vocalist/percussionist/guitarist Philip Hamilton and percussionist Jeff Haynes. With less marketing at the time of its initial release, this welcome reissue of Imaginary Day Live will surprise those who are of the opinion that Pat Metheny Group is an undeniably talented but oftentimes uninteresting group. There's always been more beneath the hood of Metheny and Mays' accessible writing and, while there are other Metheny Group discs that usually rise to the top of fans' favorites lists—the outstanding Travels (ECM, 1983) being one—it's hard to think of another album other, perhaps, than the group's 1978 debut, that struck artistic gold so instantly from the first note to the last.

For those who caught the tour, Imaginary Day Live is an essential memento; for those unfortunate enough to have missed it, it's an opportunity to hear the group in top form, flawlessly executing material that remains some of Metheny and Mays' most memorable to date.

Tracks: Into the Dream; Follow Me; A Story Within a Story; Imaginary Day; Heat of the Day; Across the Sky; The Roots of Coincidence; Message to a Friend; September Fifteenth; Minuano (Six Eight).