Sergio Krakowski: Pássaros: The Foundation of the Island

By JAKOB BAEKGAARD
July 6, 2016
Sign in to view read count 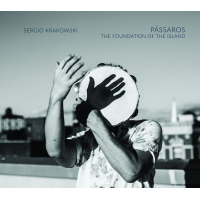 Pássaros: The Foundation of the Island is the second release on the noteworthy Brooklyn label, Ruweh Records. It is a special release in many ways. First and foremost, the leader of the date, Sergio Krakowski, is playing an instrument that is very rare in jazz: the pandeiro.

The pandeiro is a hand frame drum that is particularly popular in Brazil. It is no coincidence that the instrument has been named the Brazilian tambourine. However, there is a difference between a tambourine and the pandeiro. The metal jingles are cupped, which gives it a less sustained sound.

In the right hands, the instrument is able to conjure a world of sound and this is exactly what Sergio Krakowski does on the album. While he is a specialist on his instrument, Krakowski does not limit himself to generic conventions, playing as much with silence, breaks and rhythmic intervals as traditional patterns.

On the other hand, Krakowski does not shun the musical tradition that is connected with his instrument. In fact, there is a clear connection to the Brazilian Choro and the balance between experimental and traditional is prevalent throughout the album. Pássaros: The Foundation of the Island is both adventurously abstract and rhythmically vibrant while also having an undercurrent of deep lyricism.

The album was recorded live as 42-minute take, but is separated into six segments or compositions that flow into each other. It was born out of music first premiered on Krakowski's cyclical web-album Carrossel de Pássaros (available at http://www.skrako.com/disc.php), but eventually evolved into something new.

Together with guitarist Todd Neufeld and pianist Vitor Goncalves, Krakowski creates an enchanting soundscape that provides several melodic motifs and catchy rhythms that communicate directly in the changing flow of the music. It is an album for both body and soul.