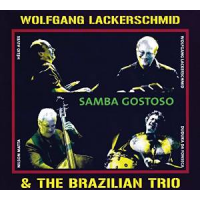 This was bound to happen eventually. German vibraphonist Wolfgang Lackerschmid has worked with each man in The Brazilian Trio at different times and he's long been fascinated with the sounds of their homeland, so he was destined to eventually collaborate with this collective.

On Samba Gostoso, Lackerschmid is seamlessly integrated into the already-established group dynamic that's been fleshed out over time by pianist Helio Alves, bassist Nilson Matta, and drummer Duduka Da Fonseca—three longtime collaborators who also happen to be some of the world's greatest practitioners in the art of Brazilian jazz. These three have often been praised, both individually and in this trio, for their ability to uphold and extend on traditions by tapping into idiomatic jazz language and fusing those ideals with the sounds of their native land. Here, they do so in the most rhythmically pleasing and melodically engaging of ways.

The program contains a handful of Lackerschmid originals, one original apiece from the trio's personnel, and three choice covers that sit well in the mix. All of it—the vibrant and buoyant rides, the tranquil drifts, and those numbers that exist between those poles—glows with a sense of lyricism and flows with utter grace. Everything from a blues variant with a samba undercarriage ("Samba Gotoso") to a haunting bossa-ballad hybrid ("Can't Make You Stay") and a breathtaking hang glider ride over Brazil's seaside wonderland ("Flying Over Rio") to a brief and appropriately ebullient choro ("Chorinho Pra Banda") lives and thrives within the borders of this date.

The material on Samba Gostoso isn't the most adventurous or dynamic music that the members of the Brazilian Trio have produced, but it is some of the most straight-up attractive, fun, and tuneful Brazilian jazz to surface in recent memory. Lackerschmid's silvery vibes and focused compositions set these four on a course that's both exciting and direct. This is eminently listenable music masterfully performed by a simpatico set of four.